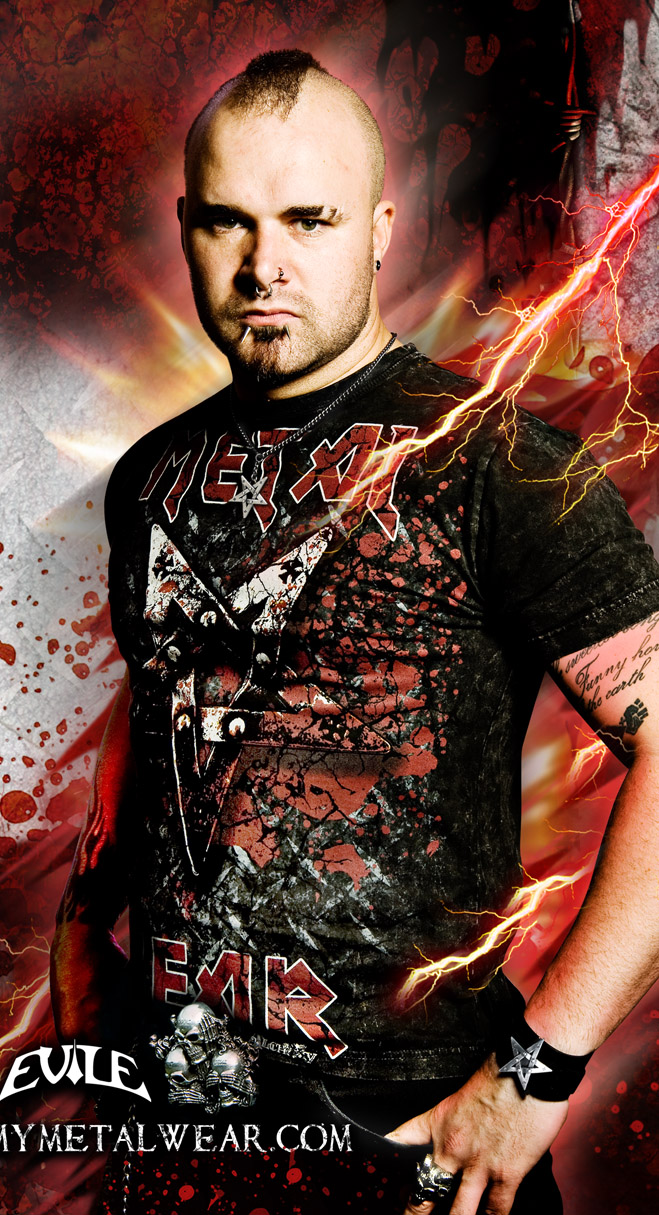 Ben wears a collection of Alchemy Metalwear items including the P623 Pentagration pendant; all available to order at www.alchemyengland.com/buy

Evile are an English Thrash Metal band and formed back in 2004. They have so far released three albums since then; ‘Enter The Grave’, ‘Infectious Nations’ and the recent 2011 album release of ‘Five Serpent’s Teeth’. They have been touring over the last few weeks and we have been lucky enough to catch up with drummer Ben Carter.

*First of all, would you be able to tell us a little bit about the band, and how you came to be?Evile are a Thrash Metal band from Huddersfield, West Yorkshire. We started out as a covers band after Matt Drake and I became friends at school, and it kind of went from there. We had a similar interest in music, both wanted to play live, and it seemed very normal for us to start a band. We enlisted Matt’s brother Ol into the band, and then recruited Mike Alexander for the Bass duties, and the band was complete.

*You’ve been on quite a journey as a band since the early days. What would you say has been your personal highlight? We’ve had the pleasure of playing in some of the greatest places in the world, and seeing some amazing sights. We’ve met so many great people and toured with bands that we’ve grown up watching and idolising, so that in itself is greatly rewarding. I’d say my personal favourites are playing Download at Donington, which for me is the home of heavy metal in England. So many legendary bands have cut their teeth there; to be included in that list is amazing for me.

*Evile have supported some pretty awesome bands over the years such as Exodus, Machine Head and Megadeth, they must have been a real influence, which if any have had the greatest impact on you as a band?When we supported Machine Head and Megadeth, it was very early in our career, and we were very naïve about how a tour was run and how to conduct ourselves. We learned so much from watching those guys backstage, onstage, and behind the scenes that it helped us better ourselves and take that professionalism across into our own setup and work ethic. We were treated really well by those guys and that also helped us and made us feel appreciated on the tour.

*Although the band have been together for over 12 years, it wasn’t until the Bloodstock Festival of 2006 when you got your big break. How did all that 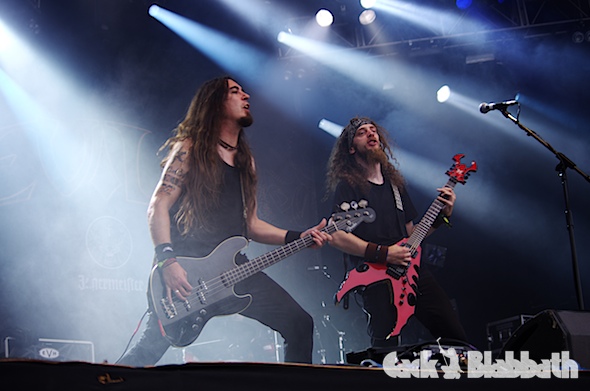 come about? We never actively looked to get signed by a record label; we never sent out demos or EP’s to labels, nor did we set a timeline for getting recognised or signed etc. We just loved playing gigs, and getting as far afield as we could to spread our music around. I think it was this honesty in what we did and our work ethic that got us the slot at Bloodstock. We were over the moon to be playing, even more so when we found the head of Earache Records watched our set and was blown away. We had an email waiting for us on the Monday morning after the festival, and the rest kind of fell into place shortly after.

*Six years on, you’ve recently completed a headline UK tour, how do you feel that went? The headlining tour was fantastic, and we had the opportunity to play some songs we’d not previously let loose live, so that was interesting! Our fans always give us a warm reception and we made sure to play extra hard seeing as it might be a while until we tour the UK again.

*It must have been a proud moment playing at the Holmfirth Picturedrome, your home town, following the success of your 3rd studio album Five Serpent’s Teeth? It’s always good to go home and do shows, but the Picturedrome is extra special as it’s so close to all our families and friends, we know so many of them will come and support us, and just have a great night. It’s a fantastic venue too, being an old cinema, and has a really special aura to it. Seeing so many familiar faces still supporting what we do is great and makes you relax so much, they’re really enjoyable gigs there.

*As a band, you seem to still have a real enthusiasm for playing gigs, are there any plans in shape for 2013 yet? Hopefully, in 2013, Evile will continue to go from strength to strength; we are already booked to record our 4th Studio album with Producer extraordinaire Russ Russell, in February. We’ll be touring extensively worldwide, hopefully visiting some countries and territories we’ve not yet visited, and then fingers crossed, we’ll be doing our thing at festivals across the Uk and Europe. We’ll never lose that want to play live, and as long as people want to hear our music, we’ll do our damned best to deliver it to them! Long Live New Flesh!!

Check out Evile’s Full Set performance at Bloodstock festival 2012 below!