Burlesque is a musical performance commonly known for causing laughter, whilst taking on a serious side to entertain the audience. This genre of performance originated in the Victorian Era, regarded as a theatrical parody.

The performer(s) relied on the audience to understand the ‘mocking’ of other serious artists. When Burlesque first appeared at venues such as Cabarets, Clubs and Theatres, they often featured a female ‘striptease’ alongside elements of comedy which made the shows very diverse. In-fact since the 70’s, a number of big Hollywood movie producers tried to adapt the dramatic Burlesque scenes to feature in films. Some of these include the 1972’s ‘Cabaret’, and ‘All That Jazz’ which premièred in 1979. Costumes in Burlesque were categorised by some as very revealing, wearing stockings, feather boas, skirts above the knee and most importantly, corsets! 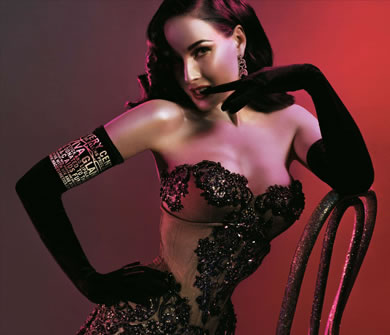 Burlesque continues to strive throughout the generations. The new acts of Burlesque such as Dita Von Teese, were influenced by movies and their curvy queens like Marilyn Monroe. With their big hair and fertile hips, these bombshells inspired women everywhere to exaggerate their own voluptuousness, and the corset especially was reborn.
Why not celebrate the long-lived Musical performance with our Corset Burlesque style choker? St.Cyr’s Delight (P587)..’An enticing revue of the Burlesque dancer’s talents. With ribbon lace-up front, black pearls and crystal heart. On deep red velvet with button fastener’ 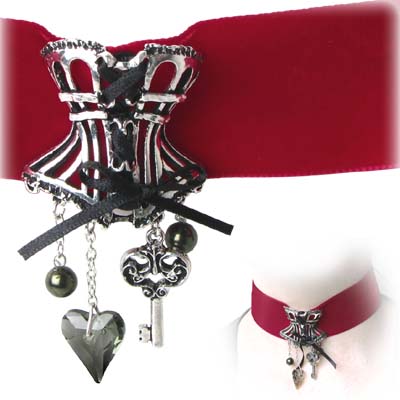 With Christmas just around the corner this would make a stunning gift or even a treat for yourself. Buy yours here to search our list of approved Alchemy Dealers: www.alchemyengland.com/buy