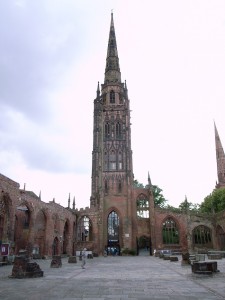 In the midst of the Easter season, thoughts tend to turn to matters ecclesiastical. Yet you don’t have to be a believer to appreciate the beauty of Christian art, particularly if – like us at Alchemy – you are a devotee of the Gothic aesthetic. Medieval church architecture is at the roots of the Gothic revival, its imposing grandeur and gloomy ornamentation the Gothic spirit manifest in stone. So it was exciting news to hear that restoration experts working on the ruins of St Michael’s Cathedral in Coventry have discovered no less than nine crypts during their repair work on the building.

Coventry Cathedral has a colourful history. The original St Michael’s, built between the 14th and 15th centuries, was practically destroyed by an intensive air raid during the Second World War. The fact that any of the Cathedral remained standing after the heavy bombing of 1940 was regarded as something of a miracle, and the remains of the medieval building – principally the spire, outer wall and a tomb – were left standing as a memorial. The new Coventry Cathedral was b 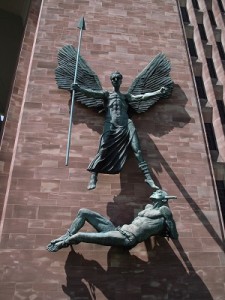 uilt alongside the ruins, a masterpiece of modernist architecture, perhaps best known for Jacob Epstein’s imposing bronze statue of St Michael triumphing over Satan on the west wall. It is the newly discovered crypts that are attracting most attention now however…

Thought to date back to the 1350 and designed to house the mortal remains of local worthies, Dr Jonathan Foyle, in charge of overseeing the restoration, has described discovering the crypts as like finding a “subterranean wonderland”. If – like many of us at Alchemy – you watch too many horror films, then you’re doubtless hoping they’ll find a skeleton with a wooden stake through it’s ribcage, ready to wreak unholy revenge once revived. Or at the very least a spectral monk or two… We should be able to check it out for ourselves soon, as Dr Foyle announced that he hopes to open the crypts to the public once they have been cleared of rubble and damp-proofed. 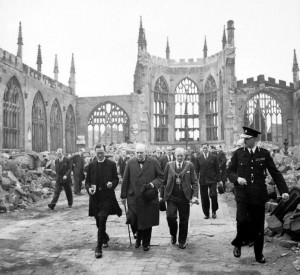 For more on the World Monument Fund’s work on restoring the ruins of Coventry Cathedral, and how you can get involved, click here http://www.wmf.org.uk/projects/view/coventry_cathedral Meanwhile, for those drawn to the Gothic ecclesiastical aesthetic, Alchemy fashion an extensive selection of jewellery, giftware and other designs guaranteed to appeal. We offer, for example, a wide variety of crucifix themed designs, ranging from our ostentatious Tears of Grief necklace (P638), 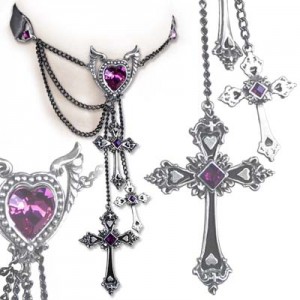 …to the rather more restrained Pugin Cross ring (R60) 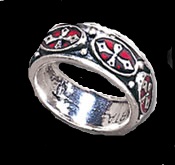 To buy any of the Alchemy Pieces pictured above, click on the following link for our Approved list of Alchemy Online Dealers! www.alchemyengland.com/buy