The UK’s legendary horror studio, Hammer films, has been delighting fans over the past few months with reissues of classic movies from their illustrious back catalogue, carefully restored to allow 21st Century viewers to enjoy them with the blood reds and midnight blacks as vivid as when they were first made decades back. The latest such restored release has provoked particular excitement among vintage horror fiends: For, not only is it Hammer’s most iconic production, Dracula, but they have also discovered and reinstated two previously unseen scenes, cut from the film when first shown in 1958. While the film – complete with previously deleted scenes restored – only qualifies for a ‘15’ certificate today, back then, censors didn’t think the British public were ready for Hammer’s rich blend of Gothic eroticism and period horror, and fought the studio every step of the way, resulting in the two cuts. 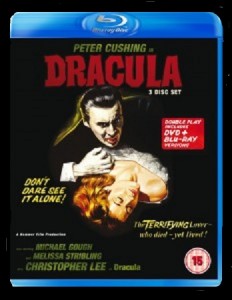 Happily, Hammer persevered, and the outcome is a taut, lean production – particularly in comparison to lavish adaptations like Francis Ford Coppola’s 1992 version – which renders the story down to a contest of wills between Sir Christopher Lee’s imperiously lupine Count and Peter Cushing’s steely, hawkish Dr Van Helsing. The peerless performances by Lee and Cushing and lush Gothic atmosphere make this not just arguably the best version of Dracula ever filmed, but also a true classic of British filmmaking in any genre. This new DVD/Blu-ray edition, overflowing with fascinating extras, belongs on the shelf of any serious fan of Gothic horror or vintage Brit cinema. As a taster, below is one of the extras, in which author and Hammer expert Denis Meikle discusses the studio’s battles with the censors while bringing Dracula to the big screen.