You could be forgiven for thinking that 2012 was a pretty poor year for heavy metal, particularly here in its British birthplace. London hosted the Olympics, with the filmmaker Danny Boyle directing the opening and closing ceremonies, designed to highlight the best of British culture and tradition. Of course the soundtrack was crucial, and Boyle carefully picked a selection of timeless British music and song, from hymns, to TV themes tunes and pop songs, and even some classic punk. The only obvious style conspicuous by its absence was heavy metal. But metal’s used to being regarded as beneath contempt by the media’s accepted arbiters of taste. For many metal fans, being perennially out-of-fashion has become a mark of pride. 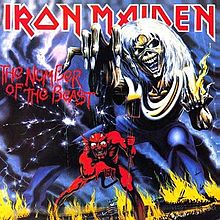 Yet those mainstream critics who charge that metal is the realm of dinosaurs, where nothing ever changes, couldn’t be more wrong. While metal stays resolutely true to its roots, the cutting-edge is in a state of constant, volatile evolution, making for arguably the most creative and varied genre in modern music. And while metal’s seldom invited to fashionable events like the Olympic ceremonies, it also remains one of the most popular at grassroots level. In a 2012 poll hosted by music retailer HMV to mark the Queen’s Diamond Jubilee, in which over 50,000 fans cast their votes, Iron Maiden’s 1983 classic Number of the Beast was voted best album of the past 60 years, beating competition from the likes of the Beatles, David Bowie and Pink Floyd by a comfortable margin.

So, if 2012’s been a good year for heavy metal, what were the highlights? Of course, the metal media has it’s own award ceremonies. (We should know, we sponsor, attend and craft the trophies for the best of them). But these tend to concentrate on the higher profile bands on the scene right now. We thought for our informal round up, we’d like to focus on fresh blood and under-appreciated veterans as well as what’s hot on the underground. So, without further ado, we present Alchemy’s connoisseur’s guide to the best heavy metal of 2012, in the shape of a top twenty albums, in no particular order, courtesy of resident metal merchant Gavin Baddeley in collaboration with a few of his illicit associates, not least Luke Hayhurst of Destructive Music…

Tis Witching Hour… As Spectres We Haunt this Kingdom

An evocative cauldron of folk, black and doom metal, the debut album from Old Corpse Road is a breathtakingly evocative journey through the darkest fringes of English legend and lore.

distinguished as a fiercely inventive and intelligent beast, Portugal’s Moonspell proved their wits and teeth are as sharp as ever with the wonderful Alpha Noir and its darkly seductive sister disc Omega White.

A Shadowplay for Yesterdays

Truly original, authentically unsettling and eccentrically English, A Shadowplay for Yesterdays is the audio equivalent to a laudanum trip – strange, sinister, surreal – Victorian black metal if you will.

Epic, atmospheric British black metal firmly earthed in the island’s pagan past, Curse, the second album from Wodensthrone exudes all the ominous darkness of an imminent roiling storm, hanging heavy over a forgotten battlefield.

With Dark Adrenaline Milan’s classiest metal exports Lacuna Coil prove they’re still at the top of their game with a cocktail that combines the more accessible sound of recent material with a nod to the band’s Gothic roots.

The Swedish trio Grand Magus have never been about reinventing the metal wheel, but with an album like The Hunt, crammed to capacity with rampaging werewolves, wistful Vikings and punchy riffs – as contagious as lycanthropy and heavy as a battleaxe – who cares?

After some serious line-up changes, Sweden’s war-obsessed quintet returned to the fray with an album dedicated to local hero King Charles XII, its heart busting with stirring battle anthems and hymns for the fallen.

A Map of All Our Failures

Just when they seemed to be treading murky water, Yorkshire’s masters of melancholy delivered a harrowing reminder of just why they remain the godfathers of gloom with a recording that’s beautifully depressing in all the best ways.

A Eulogy for the Damned

While debate rages over whether this album is Goblin’s strongest, England’s kings of groovy, horror-tinged heavy rock reigned in 2012, owning Bloodstock with their headline set on the Sophie Lancaster stage at Bloodstock.

Legal quibbles obliged Stuka Squadron to change their moniker, but the gloriously cartoonish back-story remains – the band as vampire Luftwaffe pilots – as does the sound, guaranteed to bring a fanged grin to fans of golden age 80s Brit metal.

The Threnody of Triumph

Taking their name from the Anglo-Saxon for October, Winterfylleth take their English roots seriously, placing their black metal standard in the ground with this grimly defiant, impressively nuanced release.

Tragically, band founder David Gold died in 2011, making this a posthumous – and final – album, but it’s a worthy epitaph, an authentically moving and poetic exploration of despair.

Ponderous, offbeat and morose, this quartet from Oxford, England, drop seismic riffs that land just the right side of pretentious to deliver something that’s both ominous and otherworldly.

Denmark’s Moonless answer the question ‘can psychedelic prog-rock be truly evil?’ with a resounding ‘yes!’ that doesn’t so much get under your skin as possess your soul…

Hell is Empty and All the Devils are Here

Bleak, misanthropic and as heavy as an apocalyptic hangover, Ishmael’s debut challenges you to reach the end, whatever the consequences…

While not strictly a metal album, Sabbath Assembly’s Ye Are Gods invokes the spirit of deviant hippy cult, the Process, in an audio rite destined to fascinate devotees of psychedelic Satanism.

The Manticore & Other Horrors

Though routinely written off by hordes of hostile critics in their homeland, Britain’s finest extreme metal export continue to fight the bad fight, this time with a slick, savvy and savage meditation on monsters.

At the Gates of Sethu

Death metal focused on Egyptian mythology should never have worked as anything beyond a novelty, yet Nile have consistently proved it does in spades, and this is an assured, epic example.

The second album from the Welsh quintet is the welcome sound of a band, having firmly planted its feet in tradition, finding their own powerful voice on a strong, no-frills slab of solid metal. 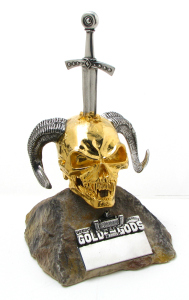 Alchemy has been supporting the metal scene for decades now, and this list represents just a subjective snapshot of the bands that caught our eye over the past twelve months. We’re also proud to support more high profile polls, such as the Golden Gods and Classic Rock awards, and hope you’ll indulge us if we take this excuse to showcase the work of our designers, who craft the trophies for those events.