The Vikings are Coming! The Warhorns Festival..

When Alchemy’s old friends Gavin Baddeley and Keri O’Shea told us that the Vikings had once more invaded the Norsemen’s former English capital of Yorvik (that’s York to any Angles, Normans or Saxons among you) this autumn, we had to know more. This time the invaders were wielding guitars rather than broadswords, though the locals were just as devastated by the assault that people were calling the Warhorns Festival. A weekend of the best in the kindred genres of folk, pagan and black metal, Warhorns was a truly international affair, with bands hailing from as far afield as Latvia and North Carolina, delivering a heathen feast of the kind of music you might find if the mythic hall of Valhalla had a jukebox. While the dust finally settled some time back, we were still eager to hear who prevailed and who fell on that fateful weekend of Warhorns…

Day One
A peal of drums announces the arrival of the reivers from north of the border, Norderobring: the Scottish six-piece’s enthusiasm soon overcoming nerves for a fun, if short set of melodic folk metal. Female-fronted local heroes Cryptic Age infuse prog metal with Celtic folk elements in an authentically innovative fashion, never dropping a note, despite hitting some glass-shattering high points. Windrider are the first of the festival’s one-man bands playing with a live line-up, Elliot Vernon throwing us all by singing a solid set of folk/Viking metal

wearing a dapper shirt and tie… [K.O.] Already establishing an impressive live reputation, Old Corpse Road draw a healthy crowd for their eerie, uniquely English invocation of the black, arcane secrets that lie beneath our green and pleasant land. Folk metal storytelling that’s almost cinematic in its intensity, Old Corpse Road are a powerful, chilling experience. Highly recommended. The picture you see above  is Nothgard’s folky Bavarian beerhall rhythms and muscular metal guitar threaten to lift the rafters more than once, but that mystical musical alcoholic alchemy remains tantalisingly just out-of-reach and, despite receiving reinforcements from their Teutonic compatriots in Wolfchant, tonight’s capable performance falls a shave short of triumph. [G.B.]

Day Two
Aloeswood and Desiderium – one-man post-black metal projects hailing from opposite sides of the Atlantic – perform live using the same band, delivering intricate, introspective and sophisticated sets that help set the atmosphere for a day of epic sounds. While by no means devoid of promise, sadly Morlich and Shallow Intentions rather suffer from being a bit similar, the sets melding into each other somewhat, and at this early stage in their respective careers can only really boast the odd powerful moment. The Emerald Isle’s Celtachor turn in the first truly formidable folk metal set of the day, combining thunderous potency, stirring melody and tin whistles (!). Next up, Ravenage seize the stage like homecoming conquering heroes with their brand of epic, upbeat pagan metal, with frontman – and co-organiser of Warhorns – Glyn evidently having a whale of a time as the beer really starts to flow. Belgium’s Angeli Di Pietra’s scattergun lyrical approach to history and folklore carries across well, whilst their contagious cocktail of Euro-power-metal and pure enthusiasm really get people moving. [K.O.] Wolfchant are as heavy as chainmail with balls the size of Norse longships, the Bavarians taking few prisoners in a barbarian onslaught that left the faithful breathless and grinning. 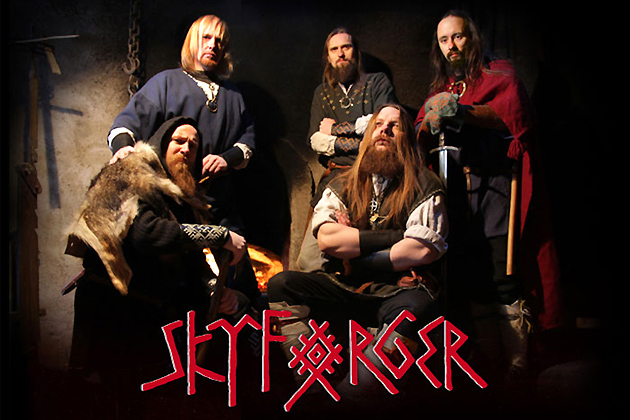 While lacking some of the traditional instrumentation evident on their recorded material, Latvia’s Skyforger [pictured on the left] – perhaps the most eagerly anticipated act of the weekend – don’t disappoint. Gentle folk rhythms circle down and collide with screaming guitars, taking the crowd on a musical journey to somewhere strange, cold and bleak, yet also enchanting and curiously familiar… [G.B.]

The Warhorns weekend was a big success, and the organisers hope to make it a regular event, with another tentatively scheduled for the autumn of 2013. Meanwhile, we’re no strangers to the siren song of the Valkyries here at Alchemy, as the multitude of battleaxes, wolves, runes and Thor’s hammers to be found in our catalogue can attest. Anyone hoping to add a little Dark Age dash to their look will find plenty to tempt them. We’re particularly proud of the Alchemy Ossa Ravenhead Belt Buckle [B37] which would look good girding the loins of any berserker, while no war god could fail to be flattered if toasted with our Viking Horn pewter tankard [AAT25].

And as a taster for the coming Spring, here’s a sneak look at the development of a spectacular new Metal-Wear piece, the Thor’s Hammer buckle. Beginning with a sketch of the original idea… 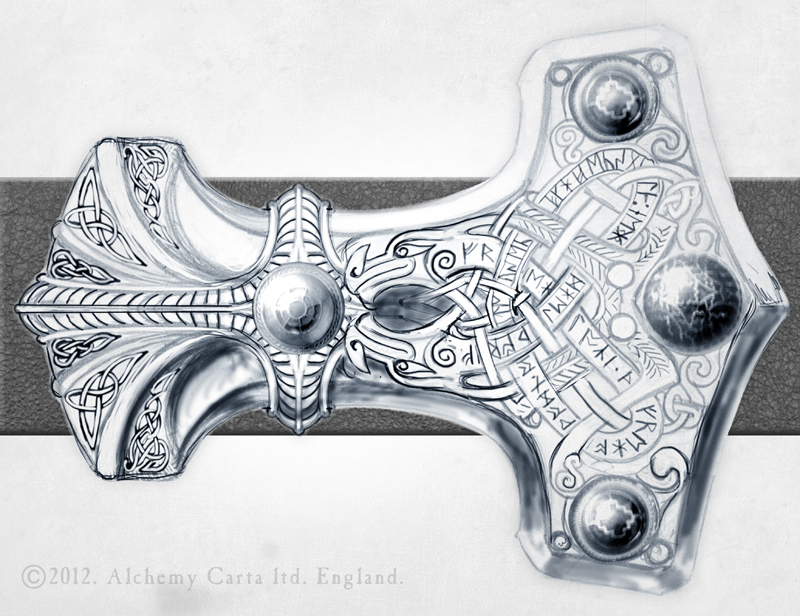 The picture below then shows the model being carved by one of the Alchemy artisans. Just wait and see the resulting, hand-forged, pewter hardware in the new year! 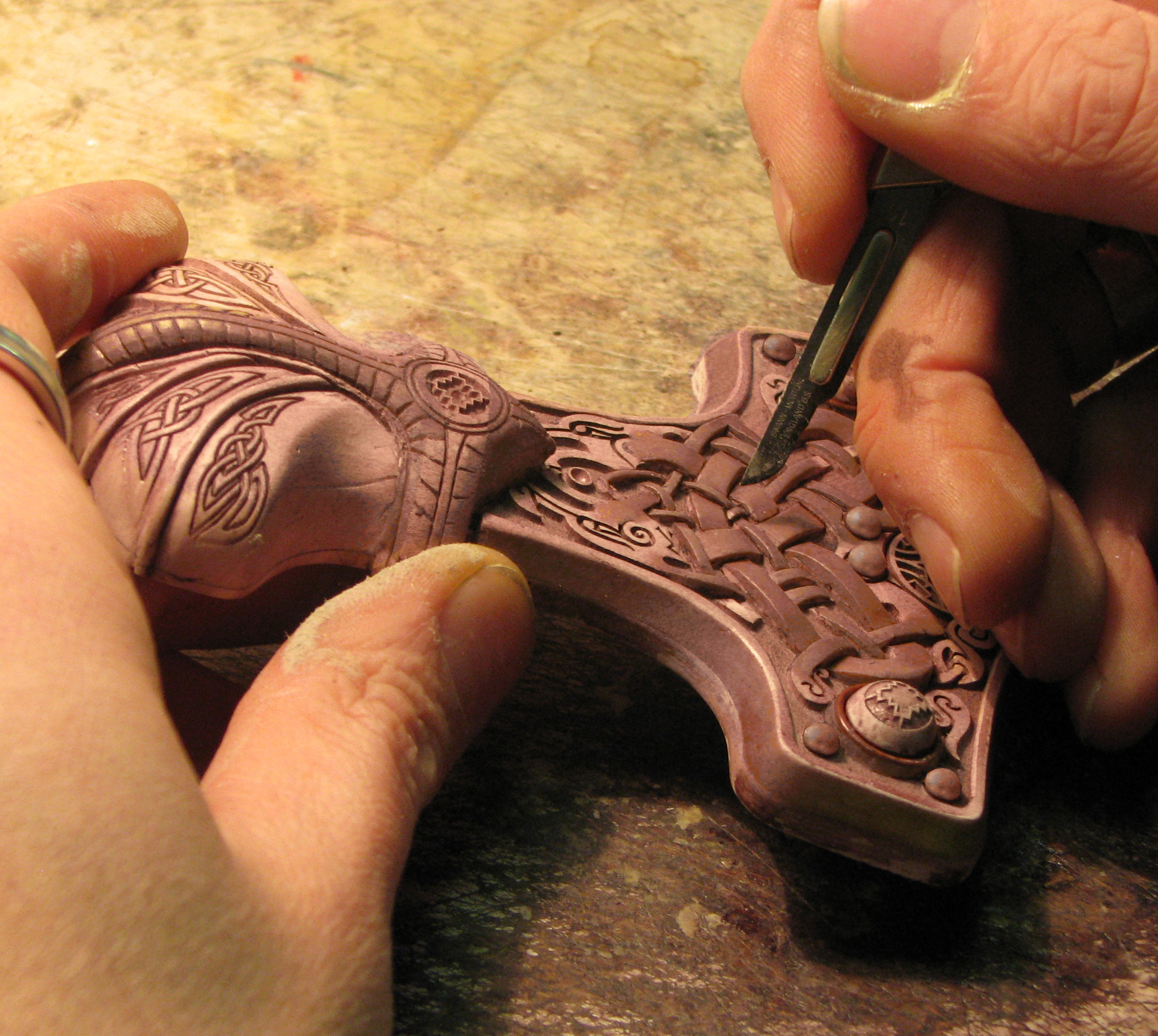 To Buy any of the mentioned Alchemy Pieces, and many more Viking Inspired pieces, please visit: www.alchemyengland.com/buy