The Process of Alchemy (Part 3 – Moulding and Casting) 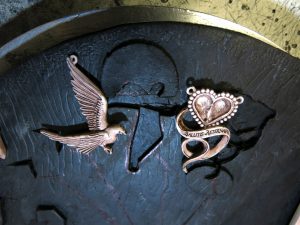 Finished cast resin models are sent down from the workshop to the mould room in the production department. It is here that the master mould maker employs his extensive experience to assess each piece and determine the most effective of his long-evolved techniques to develop each production mould. 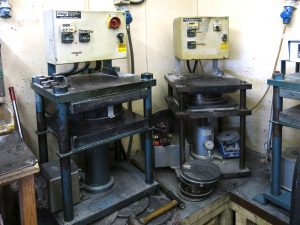 Casting moulds are made from discs of uncured rubber. To begin, each model has to have its approximate shape hand-cut and modelled into the surfaces of the rubber, i.e., pre-formed. Once completed, the rubber ‘sandwich’, separated by a parting agent, is encased in a heavy, steel ‘can’, able to withstand the great pressures and heat of the next part of the process. These loaded mould cans then go into one of our mould presses to be slowly heated and compressed over a number of hours, where the rubber semi-liquidises to become perfectly formed around the models, and then sets and is vulcanised, or cured. The process permanently changes the property of the rubber into something similar to that of a car tyre, with the ability to withstand casting temperatures of up to 300°C.

When the cured mould has cooled and is taken out of its can, it then needs to be expertly cut, by hand, to allow a good flow of the molten metal into each mould cavity.

When tested and ready for casting, a machine is set-up for that particular mould, with the spin speed and pressure, etc, having to be tailored for each; the mould is then loaded onto the casting machine’s turntable and the machine switched on. Casting is a skilled and specialised job relying on great experience and judgement, with every mould and component having their own unique characteristics and idiosyncrasies.

The English Pewter used to make all Alchemy products is far from being easy to cast in, being free of lead, nickel and all other additives which would seriously increase the flow of the molten metal. However, in previous times as well as currently in lower grade products, toxic additives such as lead, cadmium and bismuth are included in the alloys making castings much easier and cheaper to produce. English Pewter, however, is pure and made from only three minerals; around 92% tin, 7% antimony and 1% copper. Heated-up to, typically, 290° C, the metal is skilfully and swiftly ladled from the melting pot straight into the spinning mould, which centrifugally forces the molten metal into each cavity. In around 1-2 minutes, the metal will be set, the mould ready to take out and the raw castings removed. 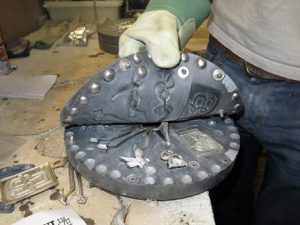 Each one of these castings is the just beginning, becoming the basic component of an Alchemy England piece. A small batch of similar castings is produced at a time, taking advantage of the caster’s finely-tuned settings and the gradually optimised operating temperature of the mould.

Next month, the final Part, 4 will explain our process of Finishing and Assembly.