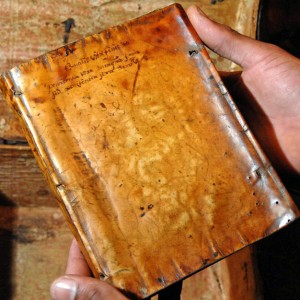 While the dusty realm of the library’s seldom seen as a hive of excitement, a recent discovery at the library at Harvard University’s Houghton Library has been causing something of a stir. For experts have recently confirmed that a volume in the library’s collection is bound in human skin. Oddly enough, this isn’t the first book belonging to the prestigious US university that was thought to have been bound in this grisly fashion. In 2006, Harvard librarians revealed that they believed they had at least three such volumes in their impressive collections. The practice is known as ‘anthropodermic bibliopegy’, proving that there’s a name for pretty much everything.

The first such volume in the Harvard collection’s Practicarum Quaestionum Circa Leges Regias Hispaniae, a 17th Century Spanish legal text held by the University’s Law Library. An inscription within claimed that ‘the bynding of this booke is all that remains of my dear friende Jonas Wright, who was flayed alive by the Wavuma on the Fourth Day of August, 1632’. However, scientific tests subsequently established that the leather bindings came from sheepskin rather than anything more sinister. Happily for fans of ghoulish tales, though, the second such volume to be tested recently by Harvard scientists, held by the Houghton Library, has proven to be the real deal. 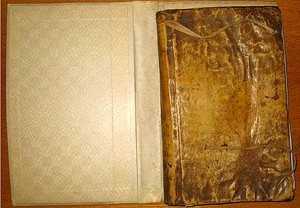 The book in question is a slim French volume entitled Des destinées de l’ame, a 19th Century collection of essays meditating on the human spirit. ‘This book is bound in human skin parchment on which no ornament has been stamped to preserve its elegance,’ reads a note from the book’s original owner who had it rebound in this gruesome style. ‘By looking carefully you easily distinguish the pores of the skin. A book about the human soul deserved to have a human covering: I had kept this piece of human skin taken from the back of a woman…’

Other documentation confirms that our original owner was a medical man, who obtained his materials from ‘the back of the unclaimed body of a woman patient in a French mental hospital who died suddenly of apoplexy.’ Scientist affirmed that tests on the binding ‘clearly eliminated other common parchment sources, such as sheep, cattle and goat.’ Though, while, ‘consistent with human, other closely related primates, such as the great apes and gibbons, could not be eliminated because of the lack of necessary references.’ The philosophical, old school book-lover can only conclude that at least this is something you won’t find on your e-reader. Yet…