A good craftsman doesn’t just use the material they work with. They learn to work with it, appreciate it, respect it. Pewter has a long history here at Alchemy. It was the first metal we began working with, albeit a low grade version, when the company was just two young brothers labouring over a smoky stove in the English Midlands way back in 1977. Thirty-five years later, we now work in countless different mediums – from wood and enamel, to steel and silver – mastering new materials as the business expanded and our ambitions and imagination grew with it. Yet pewter has remained central to what we do and who we are here at Alchemy.

As a company fascinated by history and the arcane, inevitably it is the history of our favourite medium that we find most inspiring. Alchemy is a proud member of the Worshipful Company of Pewterers, an English guild with origins that predate the Black Death, which received its first charter over a century later, in 1473, from King Edward IV. The Worshipful Company’s purpose was to ensure that the work crafted by its members was of the highest quality, a duty it fulfils to this day. This unification of time-honoured tradition and modern excellence is key to our ethos here at Alchemy.

So, just what is pewter? Essentially, it’s tin, carefully blended with other metals in order to enhance its best characteristics to match the purpose the craftsman envisages. While the earliest examples of pewter work are over 3,000 years old, discovered in Egypt, the medium truly came into its own in Europe in the Middle Ages. Pewter was the source of beauty and pleasure in countless feasting halls, chapels and jewellery boxes for hundreds of years throughout Europe. 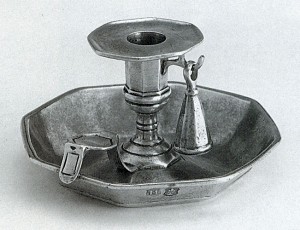 While silver and gold commanded the greatest cachet, for centuries, to the vast majority of people pewter offered the best way to introduce a little elegance into their lives, via ornate tableware, classy candlesticks and tasteful tea sets. The pewterers of England became particularly noted for their skill and expertise.

The rich tin mines of England’s picturesque southwest have drawn merchants from far afield for millennia, the Ancient Phoenicians establishing a profitable trade with early Britons as far back as 500 BC. Local lore even has it that Joseph of Arimathea was a tin trader and brought a young Jesus to preach to the workers at one of the Cornish mines. It was in the 1400s, however, that English Pewter truly began to shine, with the Worshipful Company of Pewterers establishing strict regulations as to its composition. By 1974, they banned any traces of lead from English Pewter for reasons of health and quality, enforcing even more stringent rules twenty years later, which have made English Pewter an internationally recognised standard of excellence. 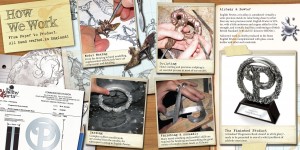 Here at Alchemy, we like to describe English Pewter as a semi-precious metal. In other words, while it’s not as prohibitively expensive as gold or silver, pewter is far closer in cost and value to precious metals than to base metals such as steel. This makes pewter the perfect medium for fashioning exquisite workmanship that remains within reach of the average pocket. When you buy an Alchemy item cast in pewter, we guarantee that you are buying English Pewter, with the legacy of quality and durability that implies. Settle for a shoddy imitation item from one of our imitators, and the chances are it’ll be cast from the cheapest materials they can find, which may not just be either flimsy, brittle or bendy and quick to tarnish, but can also contain toxic contaminants such as lead. By way of contrast, select a pewter product from Alchemy, and you’re not just investing in something fashioned to the highest 21st century industry standards, but buying into centuries of English tradition.