For The Love Of Cats

Cats, either love or hate them, have undeniably been icons of worship throughout the ages. From revered Cat-gods to our furry companions, these feisty felines are a massive part of many cultures. So let’s take a look:

When thinking of cat worship, the Ancient Egyptians definitely come to mind. Cats were a key component of their society – renowned through the countless artwork depictions, hieroglyphics and shrines. The citizens of Ancient Egypt respected all creatures (many of their gods were amalgamations of human and animal), but the cat became paramount to their beliefs. But did you know that wild cats originally inspired this? The jungle cat (Felis chaus) and African wildcat (Felis silvestris lybica) are native to Egypt and it was these species that bred together to be the more domesticated feline. There is even evidence to suggest that all cats can originally trace their ancestry to the Egyptian cat! 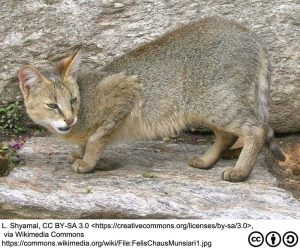 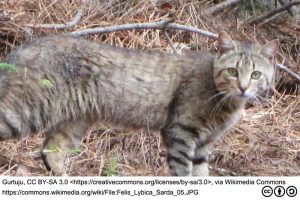 In the beginning, cats were seen as useful predators due to the excessive level of vermin at the time, thus the citizens would leave out food to tempt the cats to hang around. Similar to leaving out treats for our kitty-cats now. This led to further domestication as cats and humans began to co-exist and become mutually beneficial to each other – even hunting together! The people also seemed to appreciate the cat’s characteristics, the duality of their precise skills and their playful nature. 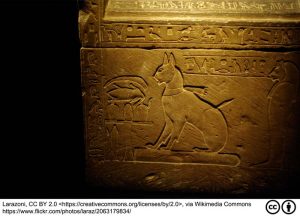 So not only being useful for hunting and pest control, as time went on our little friends became companions to both the rich and poor and were seen as good omens – bringing prosperity, protection and even fertility. They were even adorned with jewellery…perhaps the first of the cat collars?

Again, it was the Ancient Egyptians that had some of the most well-known cat-gods. However, they did not simply believe that cats were gods or goddesses themselves, they saw the cats as being a vessel for divine possession.

The most iconic cat goddess was of course Bastet. Originally a lioness, she was later adapted to a more domesticated cat and is shown as a cat-headed being. She represented a protecting mother (often portrayed with kittens) and was often called upon by worshippers for wishes of fertility and health.

There was also a more disturbing cat deity Sekhmet; the goddess of War. As well as being an aid to Pharaohs in battle, her cat-like traits were portrayed through her ferocious nature!

In Ancient Babylonian mythology, you can find the cat god of the underworld Nergal.  This god was depicted as a lion and was considered one of the most savage cats known to humanity due to his appetite for destruction. He was even known as ‘the furious king.’

There was also the Japanese supernatural creature Kasha, a cat-like demonic being who could also mimic a house cat form to live amongst humans. But the creepy part was that this creature actually transported the dead to the underworld for judgement or sometimes they would just eat them! These two definitely seemed like really mean kitties, but their qualities were also typical of a cat’s nature –  they can be cruel to their prey simply for the fun of it! 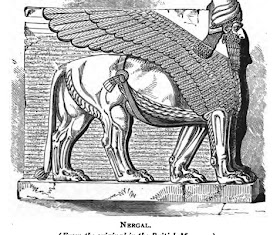 Familiars are creatures associated with the supernatural, and one of their most common forms is a cat. Myths suggest that familiars are demons in animal form but according to Pagans (and most modern beliefs) they are companions used by those who practise witchcraft to assist in their magical activities. Cats have been associated with witches for centuries, and what is more iconic than a witch with her black cat? 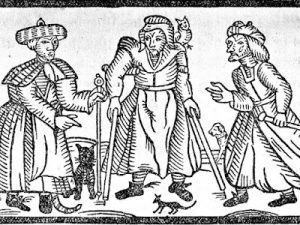 During the Witch trials, cats were commonly used as tools against the accused, and have been used as evidence against innocent women thereafter. If an old woman had a cat then she was often accused of having a familiar who harboured the spirit of a demon put there by the Devil himself. Famously during the Salem Witch trials, an enslaved woman, Tituba was accused of such a thing due to her testimony of witnessing two cats who she had been instructed to serve. 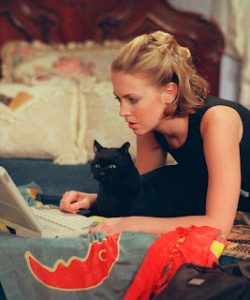 Nowadays people are not so judgemental and the understanding of cats as cherished companions has grown.  You can even find our beloved cat familiars in modern TV shows such as Sabrina the Teenage Witch; the gutsy adolescent has Salem, a comedic representation of a cat familiar in popular culture. Familiars are now globally viewed as treasured assets to those who require their abilities in magic weaving as well as creating a profound connection between human and beast.

Maybe you already have a familiar in your life…a random visitation of a stray cat that turns into regular meet-ups or an adored pet that follows your every step could be a familiar trying to connect with you!

And at Alchemy we truly have a passion for all things cat related! You can see how much they are admired by the delightful cat jewellery pieces as well as the homeware collections that display the love of cats in every room of the home! 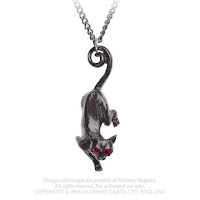 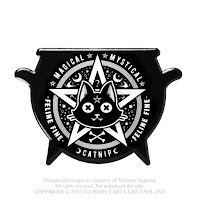 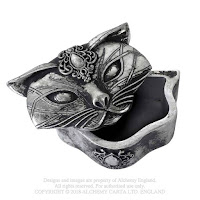 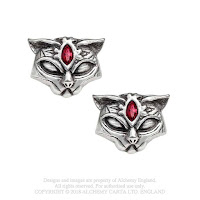