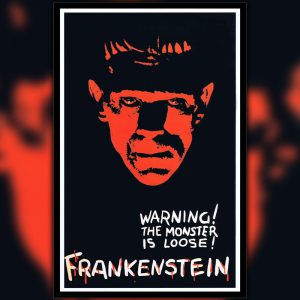 Mary Shelley’s timeless masterwork FRANKENSTEIN was first published 200 years ago. Mary began writing the book when she was still a teenager, and it is now recognised as not only a landmark work of Gothic literature, but also arguably the first true science fiction novel. It is through cinema, though, that most have come to know her immortal creation, beginning in 1910 with the first film adaptation, a silent movie generally known as the Edison FRANKENSTEIN (it was produced by the famous inventor Thomas Edison). The film’s director deliberately downplayed the story’s horrific elements, and the resulting 14 minute film is more of an amusing, pioneering oddity than a horror classic.

It would be another 21 years before the first landmark FRANKENSTEIN film was released, directed by James Whale and starring fellow Englishman Boris Karloff as the iconic Monster. This 1931 FRANKENSTEIN, made by Hollywood’s Universal studio, established most of our popular ideas about the story, from the Monster’s shambling walk, flat head, and bolts through the neck (actually electrodes), to his resurrection via lightning strike in a cavernous electrical laboratory, as his ecstatic Creator screams “It’s alive!”. (In the novel, Mary Shelley is deliberately vague about both the Creature’s appearance and the method of its reanimation, which are rather less spectacular on the written page.)

Alchemy’s resident horror scholar Gavin Baddeley is hosting a celebration of the FRANKENSTEIN bicentennial this Halloween, in the form of an immersive cinema screening, in the ruins of an authentic medieval hospital in the heart of the historic English city of York. Yet he’s not showing the 1931 FRANKENSTEIN, but its 1935 sequel BRIDE OF FRANKENSTEIN. We were curious as to why he’d made this choice, and also which other FRANKENSTEIN films he’d consider screening, if he were curating a whole weekend of mad science on the screen, rather than just one unholy night. A connoisseur’s guide to Frankenstein on film if you will… 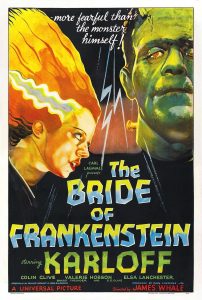 An example of that rarest of phenomena – a sequel that is better than the original – BRIDE OF FRANKENSTEIN brings together most of the talent that helped make its predecessor, with two important additions to the cast. Ernest Thesiger plays the skeletal, gin-swigging mad doctor Septimus Pretorius, who steals every scene he’s in with his creepily camp performance, and is in many respects the true monster of the film. In the title role is Elsa Lanchester, who also plays the author Mary Shelley in the film’s prologue. But it is as the Bride of Karloff’s Monster that she is best remembered, adding some welcome sexual equality to proceedings by becoming arguably the only female among horror’s classic line-up of iconic monsters. Her distinctive hair-do – imitated for countless Halloween costumes – was inspired by a bust of the famously beautiful Ancient Egyptian Queen Nefertiti. For her performance, Elsa borrowed from the unfriendly swans in Regent’s Park, who would hiss at her when she was taking an afternoon walk. While tame to modern eyes, BRIDE OF FRANKENSTEIN shocked contemporary audiences worldwide. Censors objected to overtones of blasphemy and necrophilia, with some nations – Hungary, Trinidad, Sweden and Palestine – banning the film outright. One curious fact is that BRIDE OF FRANKENSTEIN was the first film to explicitly describe both the Creator and his Creation as Frankenstein. Pedants might enjoy correcting anyone who refers to the Monster as Frankenstein. But if, like most people, they take their knowledge from the films and not the novel, then they’re wrong – from BRIDE onwards, Frankenstein refers to both the Doctor and his Monster. Universal would make a further six sequels, but Karloff hung up the Monster’s heavy boots after the first of these (SON OF FRANKENSTEIN in 1939), passing the part onto other actors as the film’s became increasingly low budget, low brow and low quality.

Frankenstein Must Be Destroyed (1969) 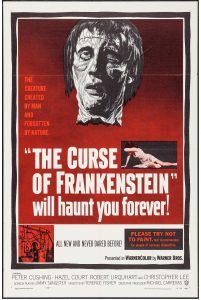 During the 1940s Universal studios gradually lost interest in Gothic horror, favouring the fad for atomic science fiction shockers in the ensuing decade. Hammer Films, a small British studio, picked up the Gothic torch, going into production on their own version of the Mary Shelley novel in late 1956, which debuted as THE CURSE OF FRANKENSTEIN the following year. It proved a big hit in the UK – though many British critics condemned the film for being too gruesome – one even feeling the need to ‘apologise to all decent Americans for sending them a work in such sickening bad taste.’ The apology fell on deaf ears, as audiences queued in even greater numbers to see THE CURSE OF FRANKENSTEIN Stateside. Hammer were now in the horror business. The film made international stars of the actors playing the Baron and his Creature – Peter Cushing and Christopher Lee. Lee was subsequently cast in the title role of Hammer’s DRACULA, with Cushing playing his nemesis Van Helsing. Lee (increasingly reluctantly) donned the Count’s cloak for Hammer another six times, while Cushing focused on perfecting his portrayal of Baron Frankenstein for a further five films. While Universal made the Monster the continuing character in their FRANKENSTEIN cycle, Hammer employed Cushing’s brilliant, ruthlessly driven scientist as the unifying factor in their adaptations. Opinion differs among Hammer connoisseurs about which is the best of the studio’s FRANKENSTIEN pictures, though many rate FRANKENSTEIN MUST BE DESTROYED as the finest in the series. Cushing’s ambitious Baron has now crossed the line between callous and actively cruel, his pathetic, reanimated cadavers as much his victims as the innocents who he butchers to create them, or those his monstrous creations kill. 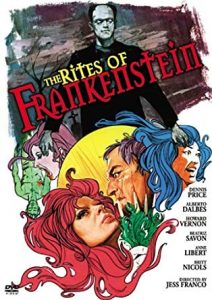 The success of Hammer Gothic and Hollywood horror had not gone unnoticed in mainland Europe, and while most Continental directors were best known for their high-brow art cinema, others were happy to go down-market. Often working with lower budgets, and a multilingual cast struggling with substandard scripts, the directors of these Euro-horror flicks frequently compensated by featuring more nudity, gore and glamour than their UK and US counterparts would dare depict. These are definitive cult movies. Dismissed as tasteless, unwatchable trash by casual viewers, to Euro-horror devotees they are lurid works of surreal, sleazy art. Typical is the work of Spanish director Jess Franco, who made literally hundreds of films in the sex and horror genres, many of them straddling the boundary between both. His 1972 film LA MALADICION DE FRANKENSTEIN (THE CURSE OF FRANKENSTEIN) has numerous alternative titles, but is perhaps best known under its UK moniker THE EROTIC RITES OF FRANKENSTEIN. Featuring a mad sorcerer with a bird-woman sidekick, a silver Frankenstein’s Monster apparently into S&M, terrible acting and plentiful nudity, it’s surely one of the weirdest, sweatiest interpretations of Mary Shelley’s classic novel ever filmed. 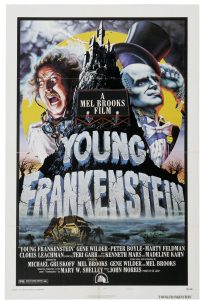 Perhaps nothing can count itself truly iconic until it’s been parodied. Universal’s FRANKENSTEIN met an undignified end at the hands of the bumbling comedy duo Abbott and Costello in 1948, while Britain’s Carry On crew sent up Hammer Gothic in CARRY ON SCREAMING in 1966. But the CITIZEN KANE of FRANKENSTEIN parodies is Mel Brooks’ 1974 comedy YOUNG FRANKENSTEIN. According to Brooks, it may not be his funniest film, but it is his best, shot in black and white in tribute to its vintage Hollywood inspiration, which it mocks with obvious affection (the equipment in Frankenstein’s laboratory is the same equipment used in the 1931 version). The role of the Doctor is taken by Gene Wilder (perhaps best known for taking the title role in WILLY WONKA AND THE CHOCOLATE FACTORY in 1971), who not only co-wrote the script with Brooks, but came up with the original idea of an American FRANKENSTEIN, keen to escape the legacy of his infamous family name.

Numerous low-budget independent studios emerged in post-War America to satisfy the insatiable appetite of the audiences of the drive-ins, flea-pits and grindhouses springing up all over the nation. 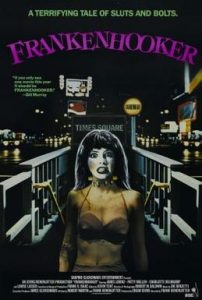 Many of these filmgoers were teenagers, and sensationalist science fiction and horror titles proved popular with this new audience, and FRANKENSTEIN would feature in numerous improbable and gimmicky guises. In 1957, hoping to steal Hammer’s thunder, AIP – the UK studio’s chief US rivals – released I WAS A TEENAGE FRANKENSTEIN on American drive-in audiences. In 1966 a similar audience were targeted by the oddball western-horror crossbreed JESSE JAMES MEETS FRANKENSTEIN’S DAUGHTER, originally released as a double-feature with BILLY THE KID VS DRACULA. There’s even a Blaxploitation Frankenstein, 1973’s BLACKENSTEIN, though the less said about that the better. The New York filmmaker Frank Henenlotter grew up watching these kinds of movies, and when the advent of home video put many of the drive-ins and grindhouses out of business in the 1980s, he was ideally qualified to make exploitation flicks for the new VHS market. His 1990 contribution to the FRANKENSTEIN canon is characteristically sleazy and subversive – Jeffrey Franken’s girlfriend dies in a tragic lawnmower accident, but his plan to resurrect her from the body parts of dead prostitutes backfires when she takes to the streets as the FRANKENHOOKER of the film’s title.

Recent decades have seen several additions to cinema’s FRANKENSTEIN canon. Many, like Kenneth Branagh’s 1994 version with Robert de Niro as the Monster, are best described as interesting but flawed. 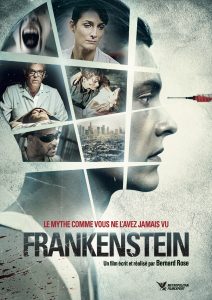 Others, like the 2014 film I, FRANKENSTEIN or the following year’s VICTOR FRANKENSTEIN conspicuously fail to give the legend new life. The former is too cartoonish and incoherent, the latter has a pleasing Gothic atmosphere, but hobbles itself with the weak idea of focusing on the Doctor’s hunchbacked assistant Fritz. FRANKENSTEIN’S ARMY (2013) deserves special mention for successfully relocating the story to the Second World War and introducing some pretty cool Steampunk monsters, though the found footage gimmick is tiresome. Arguably the best 21st Century FRANKENSTEIN to date is the 2015 version written and directed by Bernard Rose (best known for the 1992 cult horror film CANDYMAN). Taken from the perspective of the Creature, Rose’s FRANKENSTEIN succeeds in effectively bringing the story into the modern world with cutting-edge science such as genetic engineering and 3D printing, while remaining surprisingly faithful to the spirit of Mary Shelley’s novel, some two centuries after it was written.

We’ve done a few direct FRANKENSTEIN pieces over the years here at Alchemy, such as the Igor’s Knife Switch Earring (E267) – though this is now discontinued so will be a challenge to track down. Discerning mad scientists should also contemplate our designs inspired by Dr Felix Maximilion von Rosenstein, the genius who according to Alchemy lore taught Frankenstein everything he knew. Our Rosenstein collection includes such Steampunk artefacts as the Induction Principle Ring (R44), the Scrapyard Fob Chain (AWC1), Galvanic Matter Transpositor Buckle (B84), and of course the Optical Rarefying Dilator Eyepatch (EP1). 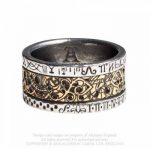 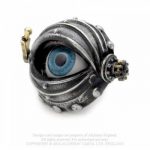 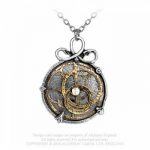