Twas the Fright Before Christmas…

For many of us, Christmas is all about spending time with family. Being more realistic, it’s often more about sitting around the TV with people we seldom see. So, what do you do if you want to watch something dark and spooky, but everyone else insists on something seasonal? We asked our resident horror expert Gavin Baddeley if there was anything that ticked both boxes, and he assured us that there was. Take it away Gavin…

Yuletide, when long, chill winter nights draw in, has been associated with scary stories since time immemorial. It was the Victorian author Charles Dickens however, who did most to establish the link between Christmas and ghosts, most famously with his 1843 novella A Christmas Carol, which also helped make Christmas the biggest festival of the year. It was first adapted for the screen in 1901 as Scrooge, the first of at least 28 film versions, at least one of which is doubtless screening this Christmas. But A Christmas Carol is more warm and soppy than weird and scary. How about something seasonal with real teeth, to cut through all the saccharine sentimentality that Santa brings every year?

So, here are half a dozen creepy Christmas films. They’re not all great movies – a couple of them are downright dodgy – but all are guaranteed to flush all of the festive cheer straight out of your system. They’re in chronological order – so if you like new movies start at the end – and are available on DVD or streaming services, or for the more obscure films you may need to delve into Youtube. I’ve also added a double-bill choice after each movie, just in case you feel like making a night of it. Enjoy…

TALES FROM THE CRYPT 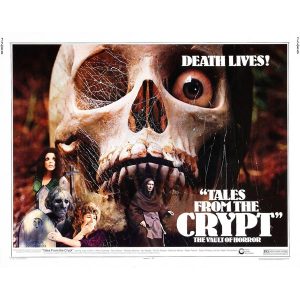 Let’s start retro with this 1972 British horror anthology film. Anthology films contain several stories, in this case adapted from the infamous 1950s horror comic of the same name. Seventies Brit horror anthologies are cheesy treats, not least because they feature half-forgotten familiar faces from TV and film of yesteryear, frequently up to their eyes in blood. In case of Tales From the Crypt, vintage sex kitten Joan Collins finds herself menaced by a psycho Santa after killing her husband. The film’s not to be confused with the popular US TV series featuring the Cryptkeeper adapted from the same comic, which also featured a version of the same story, entitled ‘All Through the Night’ in the first season in 1989. This comic strip story was furthermore reprinted for ‘Have Yourself a Scary Little Christmas’, a 1994 spin-off Christmas album of horror carols, allowing you to serenade the family with ditties like ‘Deck the Halls with Parts of Charlie’ and ‘We Wish You’d Bury the Missus’.

For a double-bill, try DEAD OF NIGHT, another vintage Brit horror anthology film, this time from way back in 1945. It’s something of a quaint, creepy classic, with one spooky story concerning a Christmas party game that goes horribly wrong. 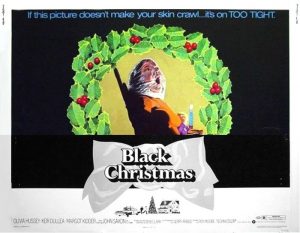 It was John Carpenter’s 1978 horror masterpiece Halloween that triggered the slasher genre. In slasher films, mysterious killers stalk and butcher their prey in a succession of extravagant and graphic murder scenes, the victims typically horny teenagers, allowing for some sex alongside the plentiful violence. The Canadian film Black Christmas debuted four years before Halloween, and Carpenter has hinted that he first envisaged Halloween as a potential sequel to Black Christmas (itself supposedly inspired by a real murder case that took place in Montreal). In Black Christmas a sorority house plays host to an unwelcome Yuletide visitor, who takes an unhealthy interest in the girls who live there. It’s now recognised as a landmark in the slasher film subgenre, though it has a lot more suspense, black wit and ambiguity than most of its less classy successors, which tend to focus more on blood and boobs than tension and atmosphere.

For a double bill, try the 2006 remake of BLACK CHRISTMAS to compare and contrast the two. As with most such recent horror remakes, purists will definitely prefer the more stylish original, though the remake may satisfy gorehounds by upping the brutality and adding an extra dose of eye-gouging and cannibalism. Ho ho ho! 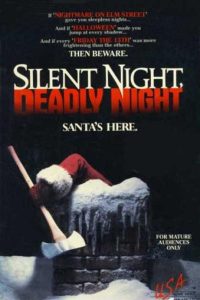 By the 1980s there were enough Santa slashers – films where the killer dresses as Santa (or on occasion targets Santas) – to almost qualify as a subgenre in their own right. Silent Night, Deadly Night wasn’t the first – or perhaps even the best – Santa slasher film, but it did provoke the most outrage when released Christmas 1984. Initially the film did good business, even beating the original Nightmare on Elm Street at the box office, but protests from angry mothers and cranky Christians – outraged at the depiction of Santa as a psycho – took their toll, and cinemas began pulling the film. One leading US critic read out the names of every one on the credits on his TV show, saying they should all be ashamed of themselves. Another fumed “What’s next, the Easter Bunny as a child molester?” Silent Night, Deadly Night isn’t really as nasty as such reactions suggest, and the film even encourages some sympathy for the killer. But the fun’s still about watching Santa slay folk, with festive moments including a sleazeball strangled with Christmas lights and a topless babysitter impaled on reindeer antlers.

For a double-bill, try ALL THROUGH THE HOUSE – released in 2015, it’s something of a crude love-letter to the Santa slashers of the 80s, though it throws enough gore and nudity at the screen to make Silent Night, Deadly Night look like a Pixar film.

If you’re dreaming of a weird Christmas, then you need this 1989 cult oddity. In it Dan Haggerty (better known to older viewers as Grizzly Addams) plays a cop, sacked for alcoholism, who gets a job as a mall Santa. Before you can say ‘Merry Christmas!’ our hard-drinking, chain-smoking hero has uncovered a Nazi plot to use occult rituals to breed a race of evil elves to revive the Third Reich. And then things start to get strange… Elves is just as simultaneously awful and wonderful as it sounds, so if you’re a fan of ‘what the hell were they thinking?’ films, then track down a copy, invite some friends around to watch it, and before you know it everyone will be wondering if somebody spiked the punch. All of those involved in making this masterpiece apparently tried to disown it, so it’s hard to find, but worth the hunt.

For a double-bill, try JACK FROST, which isn’t quite as tasteless and demented as Elves – what is? – but this 1997 saga of a mutant snowman possessed by the spirit of a serial killer should raise a few laughs if you’ve downed enough egg nog. And you’ll never look at Frosty quite the same again.

If you like to go further afield for your seasonal cinema, and don’t mind subtitles, then this 2010 Finnish oddity should be top of your list. You even learn a little about Christmas abroad – did you know the Finns have a Christmas goat? The fact that the film is largely set in a reindeer slaughterhouse should give some idea of the way Rare Exports blends Yuletide themes with some treacle-black humour in a unique, charming, yet occasionally disturbing fashion. When our reindeer-farming heroes lose many of their standard livestock, they stumble onto another a different more unusual festive quarry, as the movie mutates into a bizarre cross between The Thing and Santa Claus the Movie. The scene where Santa’s elves – flesh-eating, naked old men in Rare Exports – swarm around trying to free their master will stick with you long after the credits!

For a double-bill, try the Dutch film SAINT, made the year after Rare Exports, with a similar plot, depicting the Dutch version of Santa – a Bishop who arrives from Spain on a boat – turning out to be far more sinister than the jolly fellow you find in picture books. 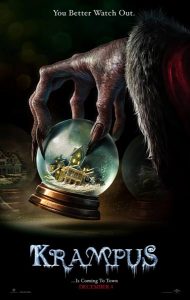 In recent years the Krampus – a shaggy Yuletide devil who whips naughty children – has really caught on outside his Alpine homelands. By 2015 he’d reached Hollywood, with several film versions released just in time for Christmas. Bad children got Krampus the Christmas Devil, a truly feeble effort, doubtless designed to cash in on its superior namesake (avoid Krampus the Reckoning too). Krampus is the one you want, directed by Michael Dougherty, who also gave us the wonderful halloween anthology film Trick ‘r Treat. It’s a horror comedy that plays out a little like an updated, more sinister version of Gremlins (also a Christmas movie if you think about it), as a dysfunctional family’s bickering unleashes the dark side of Christmas, which besieges the family home.

For a double-bill, try A CHRISTMAS HORROR STORY, another seasonal release from 2015 featuring the Krampus. It’s another anthology film, this time starring William Shatner as a drunken DJ whose antics bind together four other tales of terror, some of which gets satisfyingly dark.