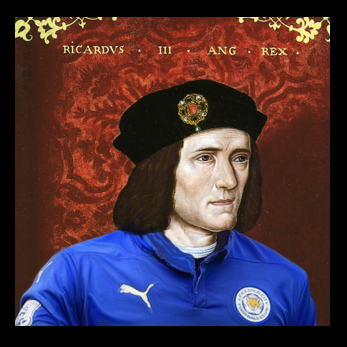 The city of Leicester’s star has truly risen.

From King Richard III’s visitor centre and the King Power Football Stadium, to Alchemy’s noble status as the alternative, creative royalty for almost 40 years – a last stronghold of Leicester/UK design & manufacturing! Producing jewellery celebrating our “Last Plantagenet” to creating badges for faithful Foxes fans, Alchemy has and continues to be indelibly associated with the city’s renown & success.

Alchemy’s early, humble location in the Braunstone Gate/West End area of the city was a mere stones throw from where King Richard III’s remains were originally believed to have been thrown into the river, and just a little further to where his bones were famously discovered, unearthed and re-entombed in the city’s cathedral. Turn around a little and throw the stone slightly further towards the Filbert Street area, within view of our first workshop, and you’ll find the city’s football ground, now re-named the King Power Stadium.

l might sound a strange combination, but, curiously, have a strong connection. With the Alchemy Directors’ love of football, the biannual Whitby Goth Festival football match between Real Gothic FC & Stokoemotiv FC (“El Gothico”!!), darkly raising funds for unsuspecting charity.
Alchemy has produced many of the Premier League’s football club merchandise in the past and even sponsored a local football team, Groby Juniors FC, who have always had aspirations toward producing young talent for the LCFC squad! Maybe some of Alchemy’s sponsorship helped some of these youngsters on to Premier football status…who knows?

We’d like to think that Richard III would repay Leicester’s reverent celebration of him by supporting his adopted home’s amazing rise to fame and glory, whether it be the arts, creative industry, or sport. He’s already, clearly helped with the unprecedented success of Leicester City and their miraculous rise to power – Premiere League Champions 2015/16!