Everyone likes fairy tales, don’t they? We all know that everyone here loves darkness even more. So we thought, why not combine those two?

This frosty December we share with you a gothic story. 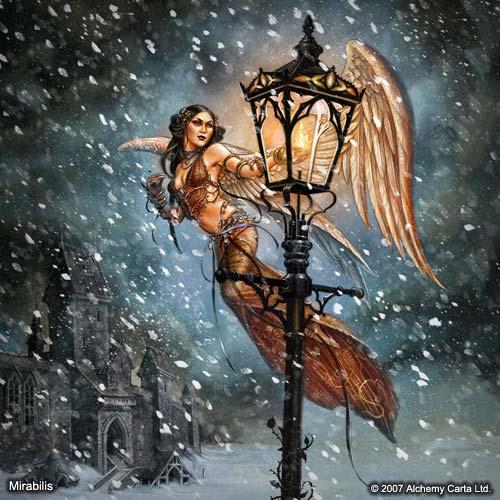 Once upon a time there was a village where everyone liked colours. Everyone liked dressing in colourful clothes and dye their hair in bright colours. All except for one.

They called her Snow Black. This because her hair was black as charcoal and her skin as white as the falling snowflakes. And to make it worse she always wore black. All black! All the time!

Everyone found her odd for she never wore any other colours and she always stood out extremely in a crowd though strangely enough, she never seemed to like the attention. In fact, she always pulled herself a
way from the crowd whenever there was some kind of gathering, and wouldn’t even attend them if it weren’t for her parents. She loved being on her own, and spent a lot of time in the forest or loved reading in the graveyard, another peculiar feature according to the villagers.

She had few friends. They’d sometimes wear a black shirt or trousers but never dressed fully in black. They were afraid of what the villagers might say though they liked the fact that wearing black angered their parents. But Snow Black didn’t wear black because it had a certain effect on people. She did it because that was how she felt. That was how she saw herself in the mirror.

Where did the black clothes come from, you ask? She dyed them herself because no one sold black clothes. Her parents always tried forcing her to wear their choice of colourful clothes. They’d burn her black clothes and put colourful fresh ones in her room. She’d ignore their gesture, and dye the new clothes in black so was still able to wear her favourite colour.

One day though things took a different turn.

One morning, suddenly, there in the middle of the village stood…a black cat!

The villagers stared at this peculiar looking black cat and started to speculate at once.

‘We must destroy it!’

Others shouted: ‘Are we sure it’s black? Perhaps it has been dyed…’

In matter of seconds they all faced Snow Black who was standing among them, staring at the cat looking just as astounded as they were.

‘She did this!’ Shouted one woman.

‘She’s…she’s…got powers, soon we will all wear black!’ said a man. The whole village was suddenly against her.

They tried catching the cat but it quickly ran away. Then they turned towards the girl, even her own parents looked at her disdainfully. Snow Black looked at her friends but they immediately ran away, hiding their black clothes.

‘She is evil!’ the villagers started shouting.

‘Let us lock her away’ they all shouted, ‘before she becomes our doom!’

They were closing in on her, ready to grab her.

They all stopped approaching her. She had never talked to anyone except to her so called friends and hearing her voice startled them for (though they would have never admitted to that) she had a very lovely and warm voice.

‘You’ll never have to see me again!’ she insisted.

‘Go then!’ shouted her own father.

‘Take that black cat with you!’ shouted her mother.

‘And if we ever even see the colour black again we’ll hunt you down!’ they all shouted.

Snow Black quickly backed away from the villagers and ran.

All alone walking through the woods.

Snow Black thought of the villagers’ last words, ‘if we ever even see the colour black…’ What about the night? What about darkness? It is black, is it not? They see it. Will they start blaming her for that too? How about their own shadows? Is that her doing as well? She felt so angry as it all seemed so unfair. If there was no black, no darkness they would have never known the difference between 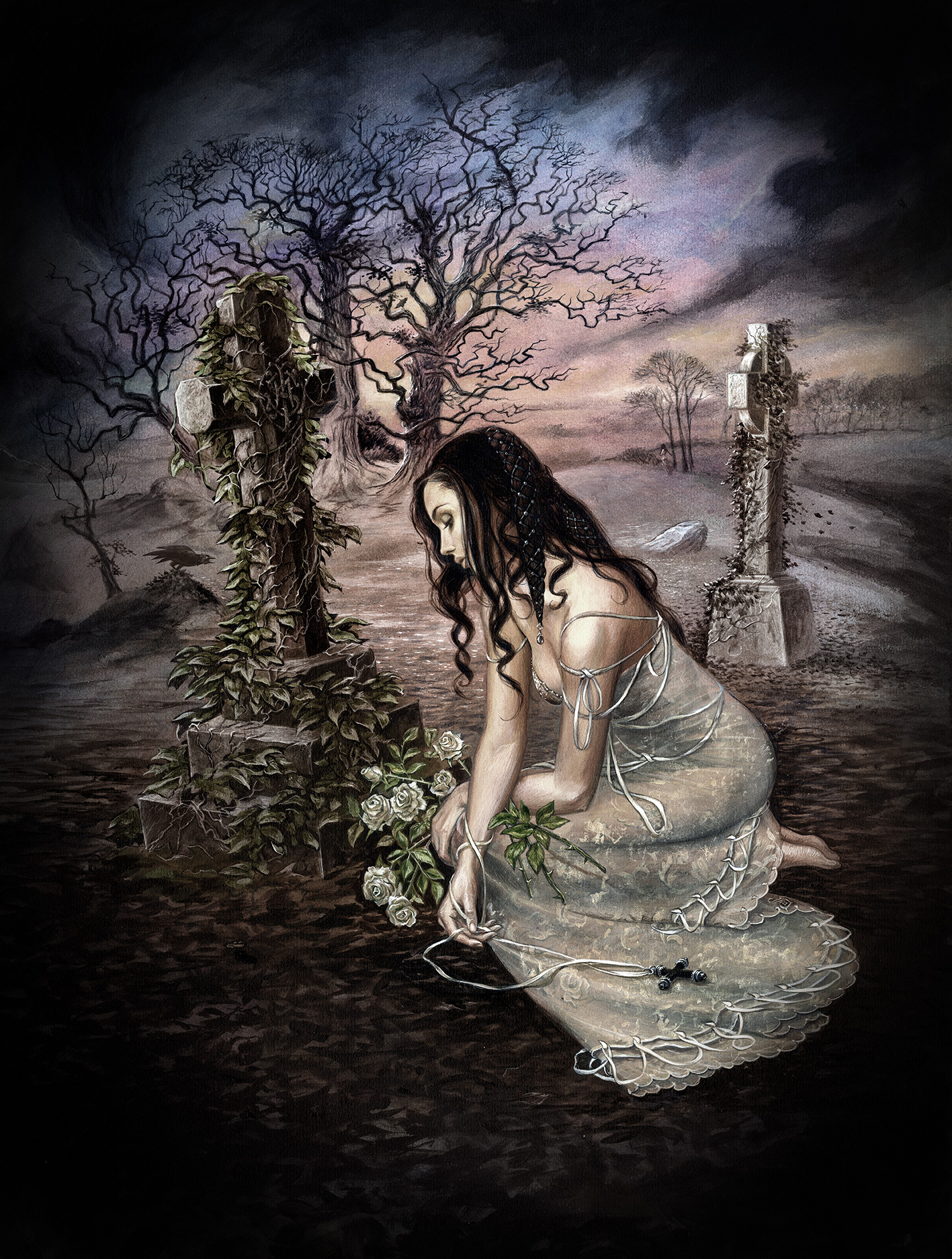 light and dark. How can you appreciate the sun or true colours if you have no understanding of the darkness?

Night came over and although she usually loved it, she was quite scared to venture the woods all alone in an unknown area. She felt lost and alone and although she had always felt alone, now it was different. Now, she was truly alone and she felt so hated by everyone and because of what? Because she was different? No, because she dared to think differently and dared to be herself. She had never thought of it that way. Only now did she realise how ignorant the villagers were, how quickly they judged her and why? The only thing they were actually afraid of was themselves. They were so afraid of being something else, of being different, of being what they wanted to be because of what others might actually say. Hiding behind masks. She would never be that way. She would always show her true colours no matter what.

She suddenly stopped. Before her stood the black cat. It was staring at her, it’s eyes green and bright.

Snow Black smiled at it.

‘Come here!’ she said softly. ‘I won’t hurt you! Those villagers might if they find you again.’

The cat just kept staring at her.

‘Come!’ said Snow Black but the cat ran away. Then she noticed. There, right there in all the darkness, there was a beam of light. She quickly ran towards it and soon realised the cat had stopped there. It stood on the threshold of a small, humbled cottage. It could have been the house of an evil child-eating witch or worse, one of the colourful villagers, but Snow Black was not afraid.

The door suddenly opened and the cat started mewing.

Suddenly a young man stood in the door opening and lifted the cat up. ‘There you are!’ He said smiling while petting the cat.

Snow Black stared at the young man. She couldn’t believe her eyes. For you see, the young man wore long hair and black clothes, all black! Then she knew. They both knew for the young man was now staring at her as well. They were no longer alone.

No matter how different or strange you believe you are, we hope this Christmas you are with or find someone just as lovely, different and strange as you are.

Merry Christmas and goth bless everyone!

Finding a kindred spirit is a rare and beautiful thing and for some it only happens once in a lifetime. Celebrate your uniqueness with your soul mate using Alchemy jewellery.  The Rose of Passion Necklace [P560] with it’s matching ear wrap [E276] with is black enamelling and blood red Swarovski crystal is the perfect way to show off both your passion and your individuality.  Let your love blossom and glow with the Love’s Blossom ear studs [E337] or the Hearts Blood ear studs [E332]. 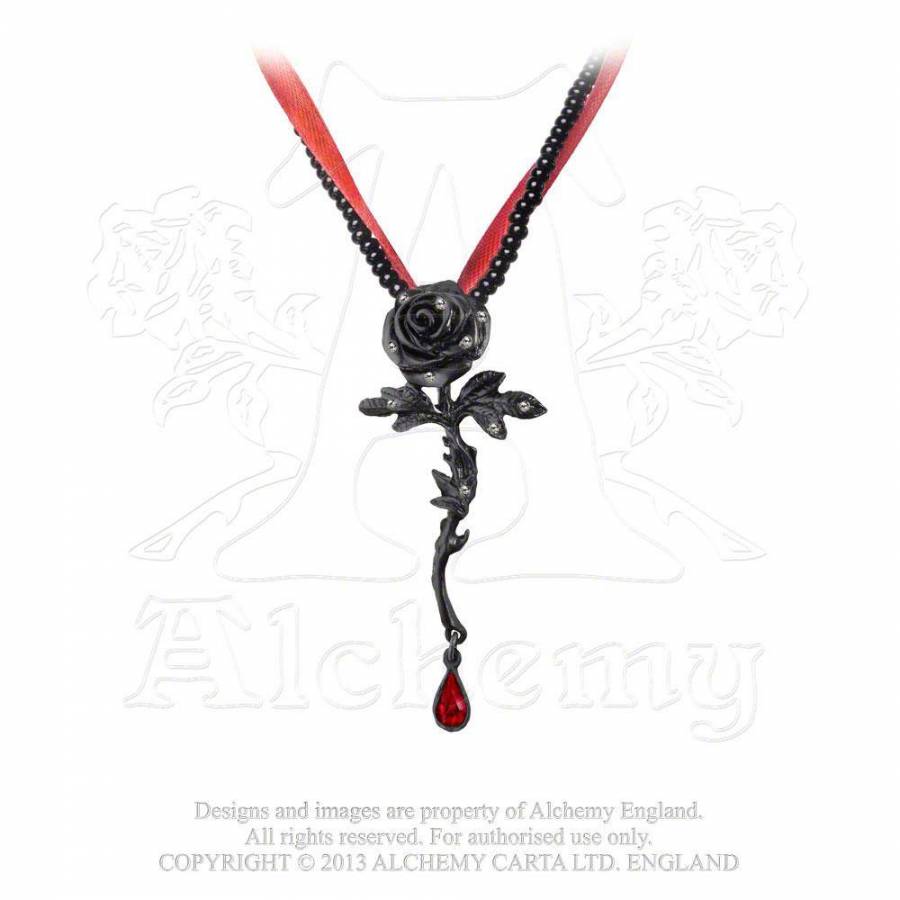 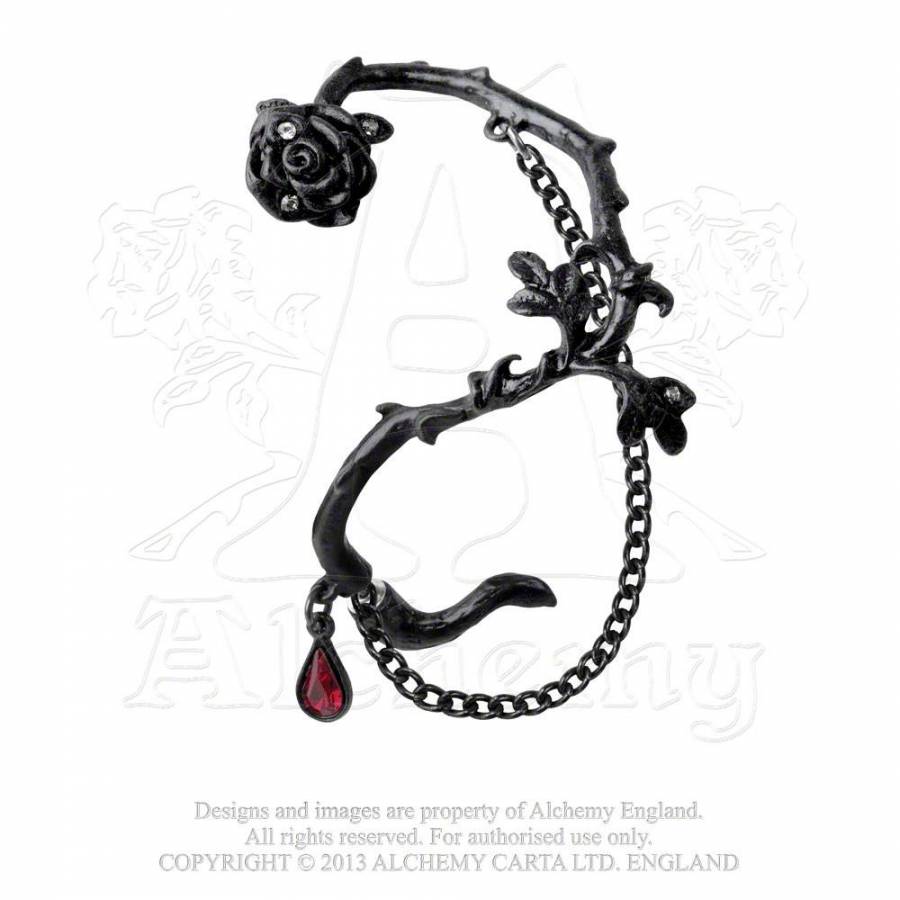 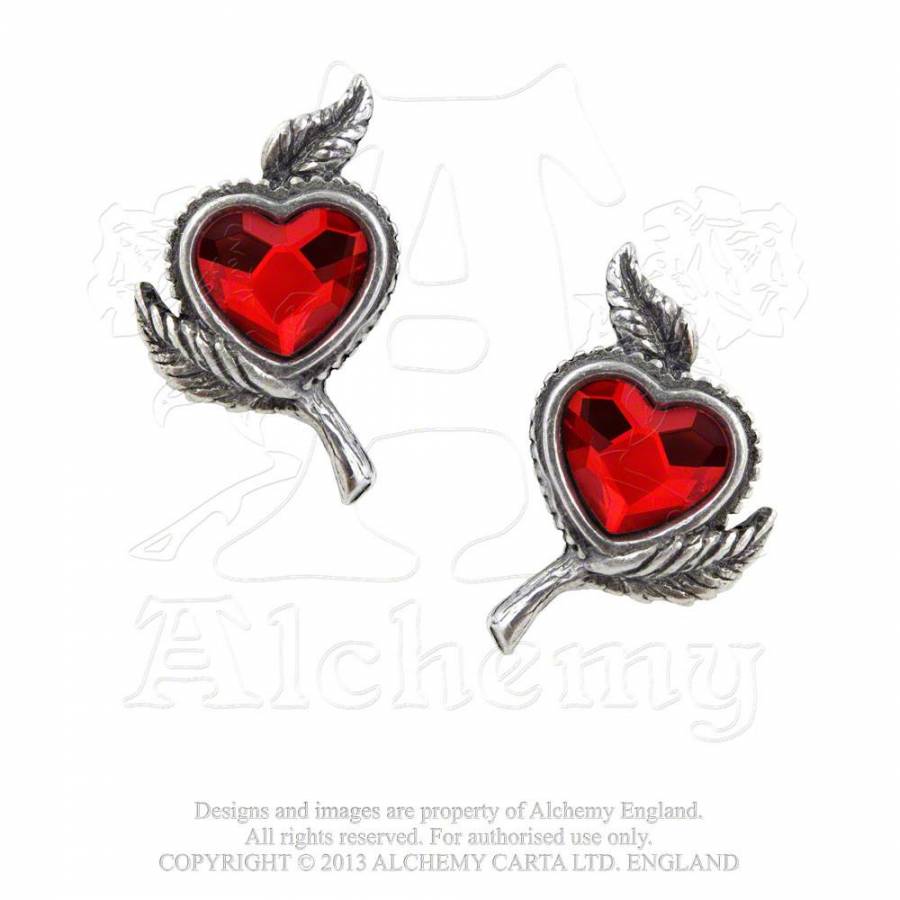 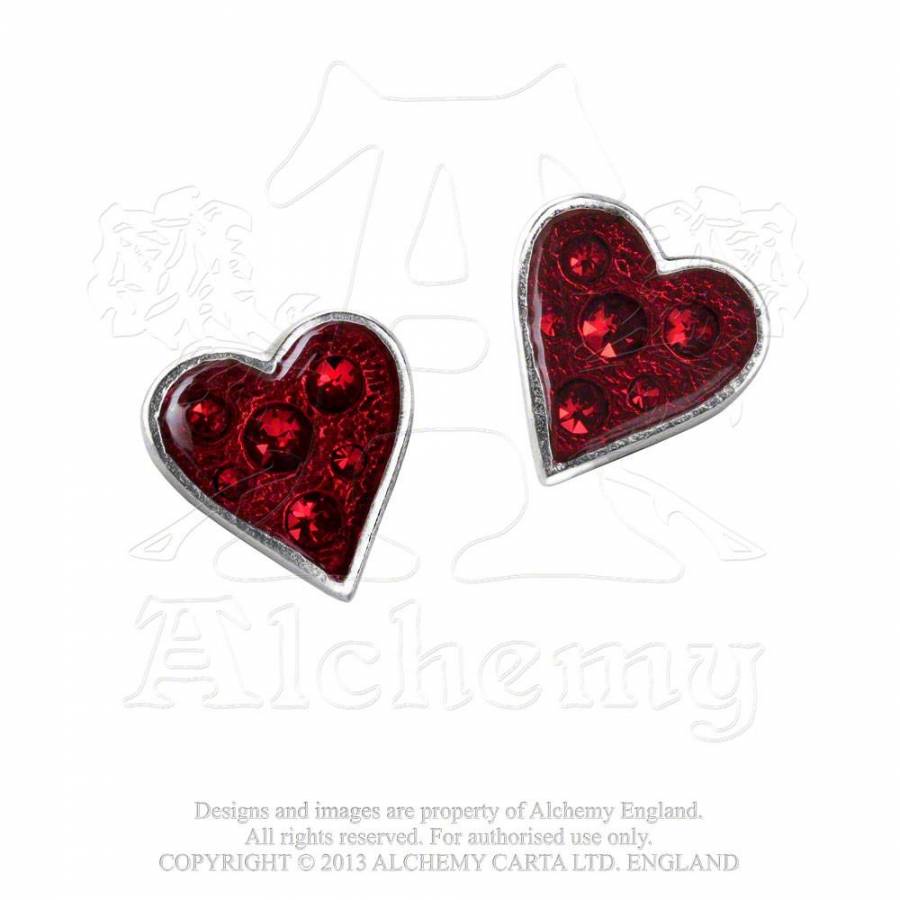