Rosa Noctis- In Search of the Midnight Rose 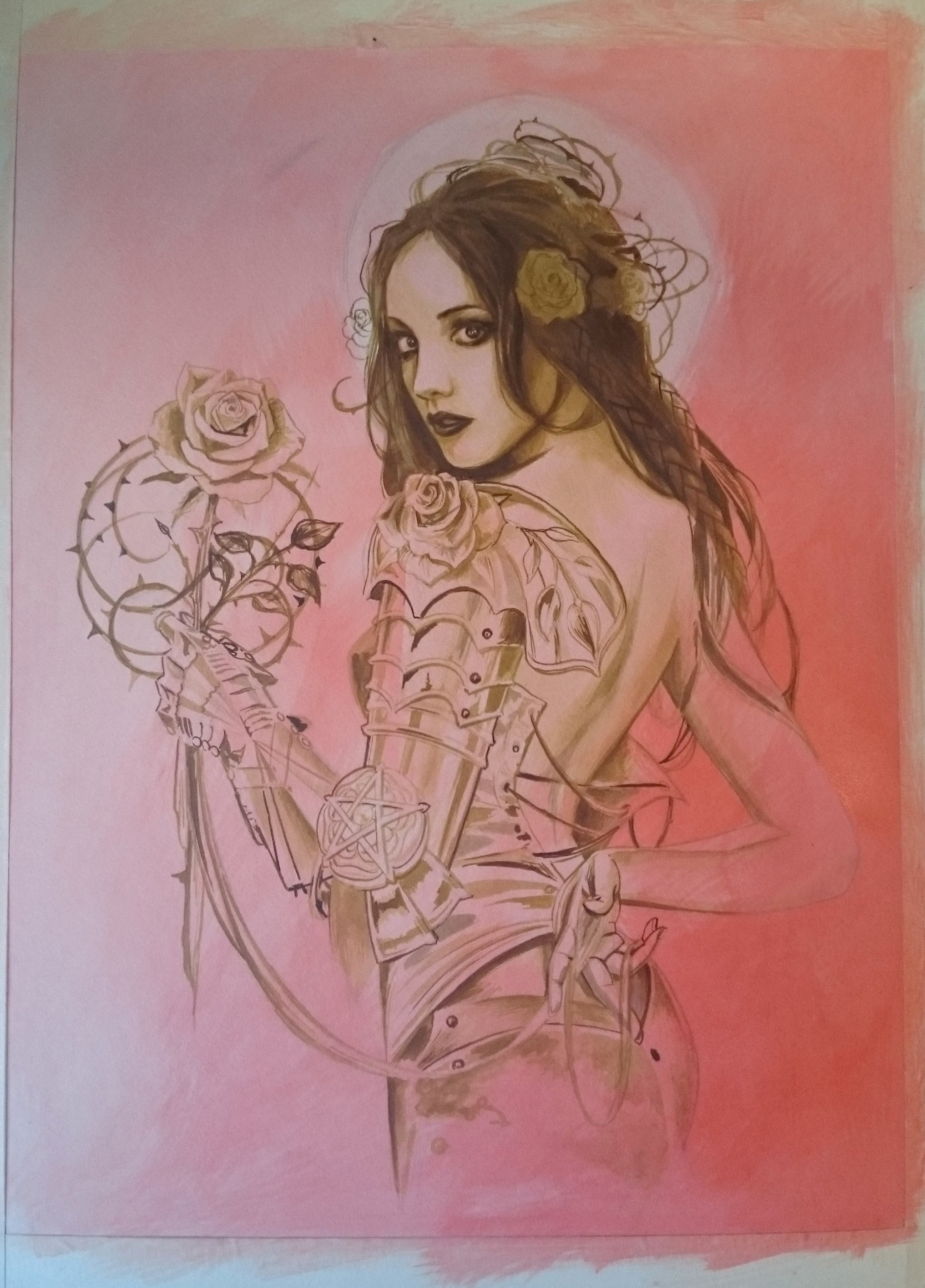 As the principal artist at the Alchemy England Design Studios the pleasure of designing and painting the annual Alchemy catalogue cover falls to me.

So, this time around I thought I’d share with you the design process which leads from the spark of an idea to the finished cover painting. 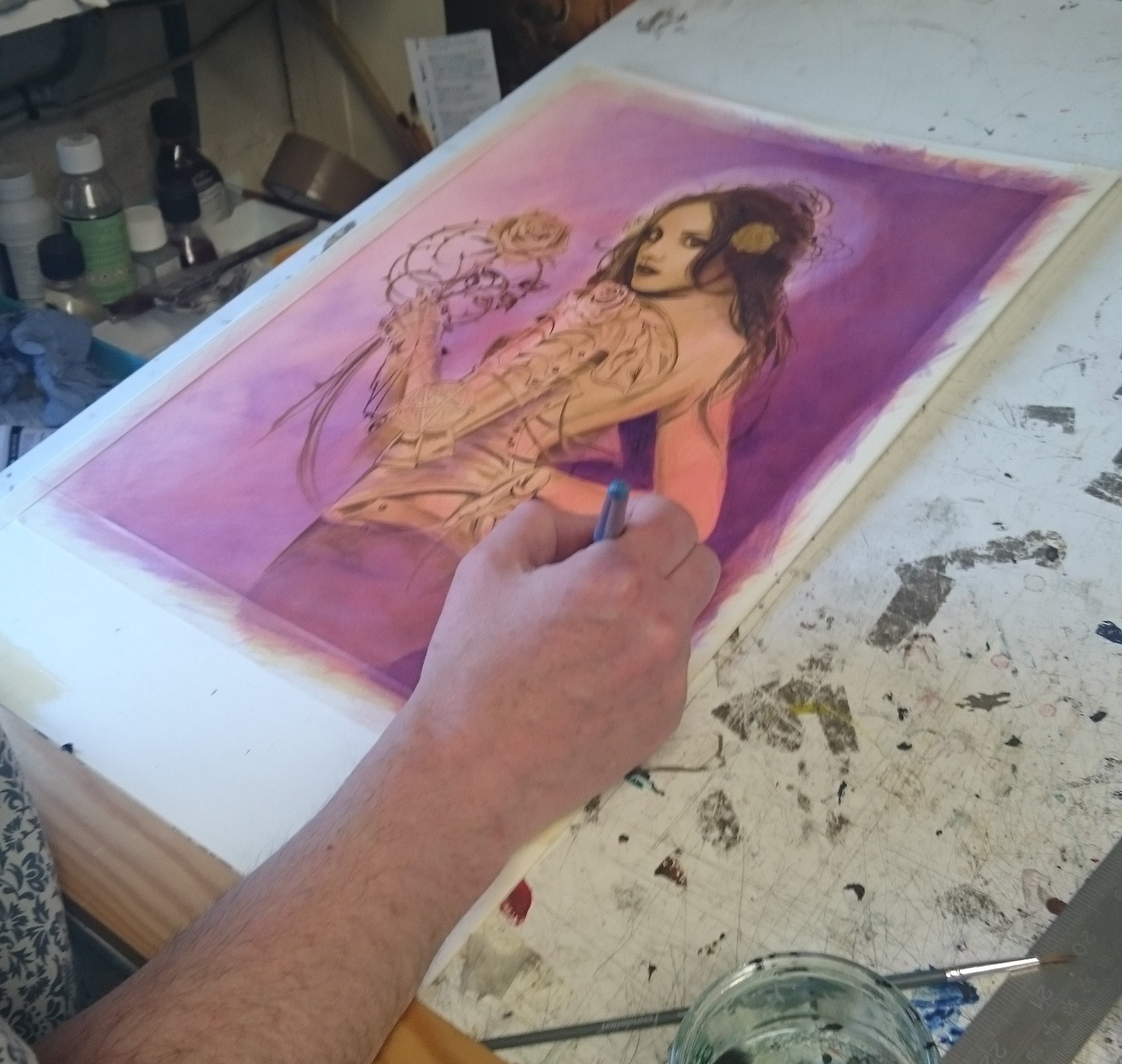 The brief  I’m given each year tends to be quite nebulous. The image needs to convey the essence of the many and varied Alchemy collections without specifically highlighting an individual range. 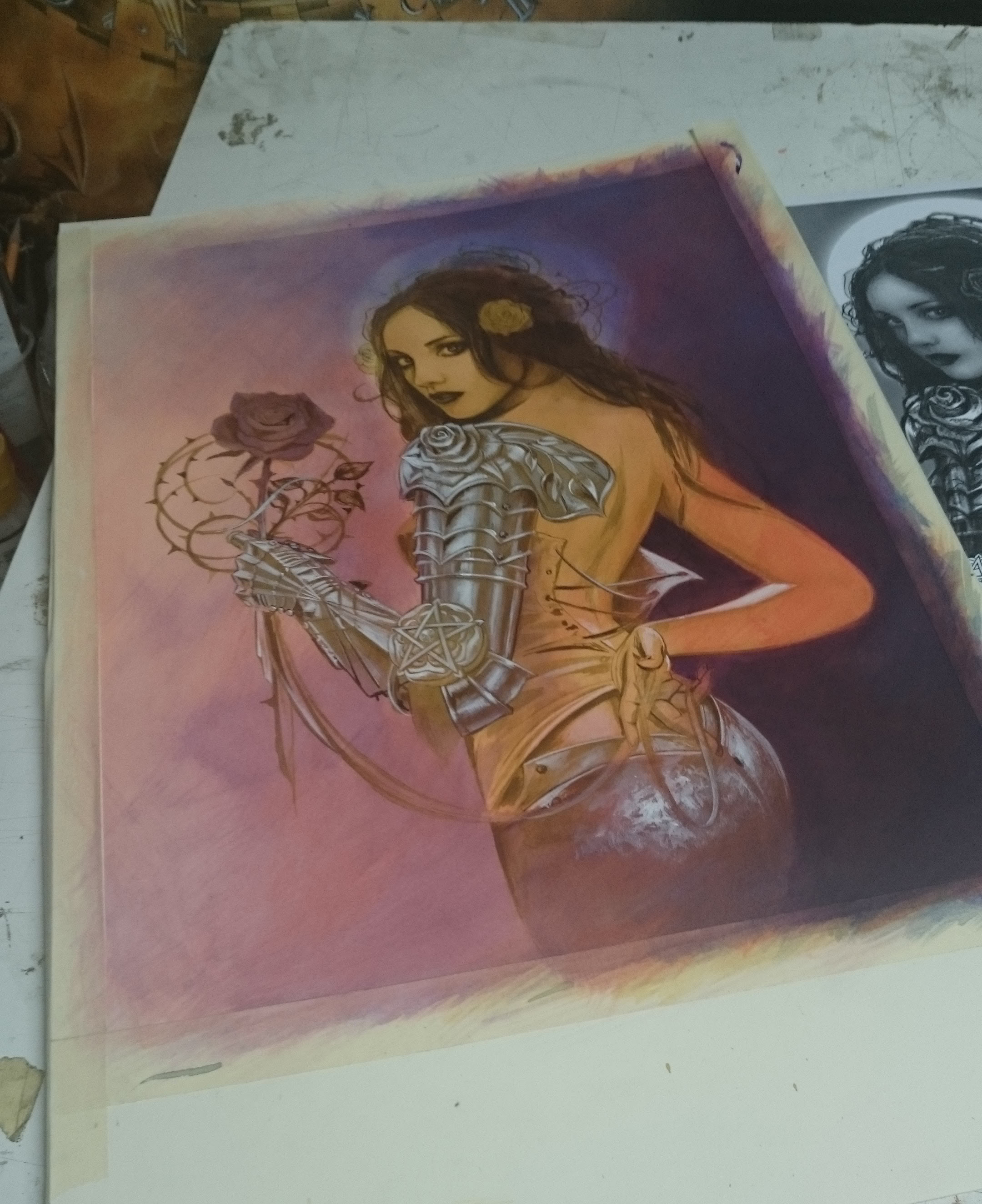 It should somehow involving the emblematic black rose, and infer a story beyond that which you initially see in the image. There should be a blend of contrasts, be they light and darkness, male and female, and be as different as possible from the previous years cover picture.

The inspiration for this years art came to me whilst reading Simon Armitage’s poetic translation of the Arthurian tale – Gawain and the Green Knight. It occurred to me that the Alchemical Black Rose could be seen as an allegory similar to the impossible quest for the Holy Grail. I was also taken with the idea of creating an image that resembled a lost Pre Raphaelite classic, with their depictions mediaeval myth and legend. In this tale, a valiant pilgrim would search for the black rose that would only bloom under a full moon on a single night once in a century. 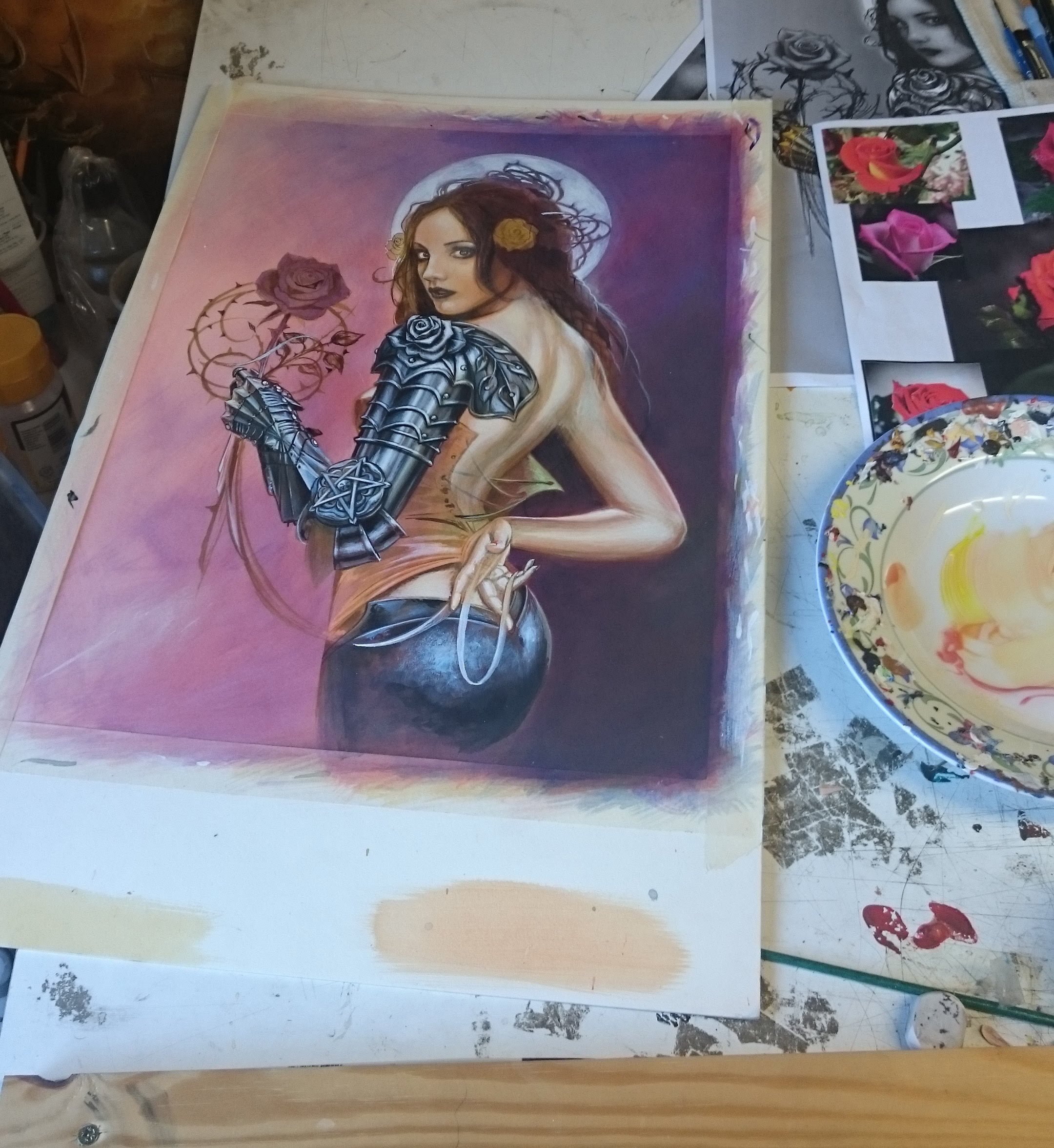 To strike a nice balance my subject would be a questing knight, but like Joan of Arc, would harmonise masculine and feminine virtues with implacable armour and a complexion of ephemeral beauty. 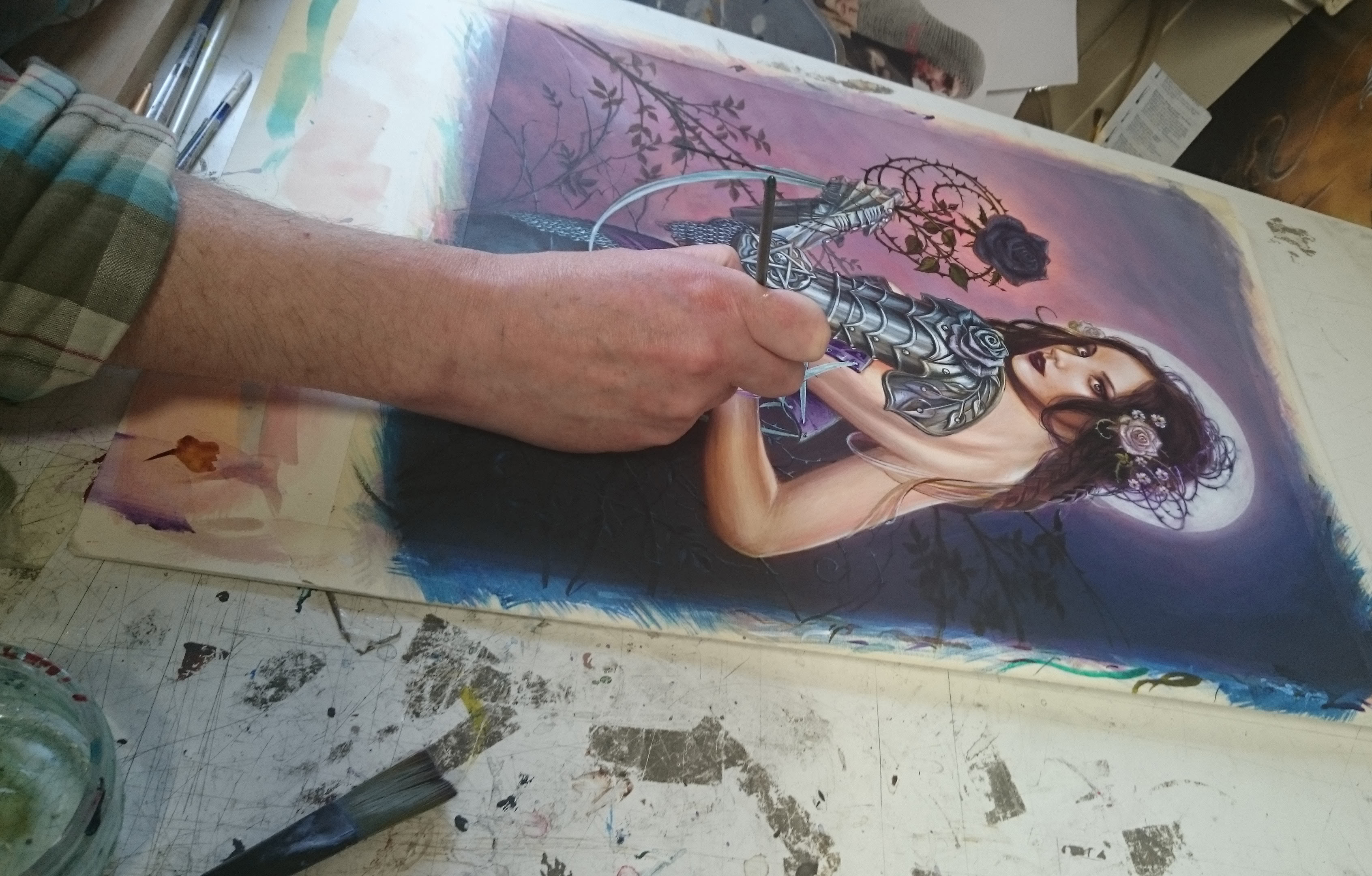 On this occasion, before I even put pencil to paper I had a vision of what the finished painting could look like, with my imagined model being a younger sister or cousin to Rossetti’s muse Lizzie Siddal or Jane Morris. This made the painting process rather straight forward. The composition would unfold from the underlying message of strength and vulnerability, with the two halves of the design mirroring each other. I used the girl’s arms as vessels to convey that contrast and linked the two together with a silk ribbon snaking from a loosened corset. This also made a nice visual line to lead the eye up to the black rose.

The painting techniques I utilized also looked back the style of the Pre Raphaelites, although with my necessity for commercial speed, I would replace oils with fast drying modern acrylic paints. Starting with a white board I gradually built up layers of shape and tone, before glazing colourful shades over the monochrome form beneath. Strangely for such a dark painting, there is no black paint involved, just warm fleshy tints over-glazed with rich purples and blues.

After a time span of a couple of weeks, interspersed with lots of other design jobs, the painting told me it was finished. Interestingly, for the sake of a good cover composition, the final painting was flipped into a mirror image. Sometimes that can look a bit strange, but on this occasion Rosa Noctis weathered the change with knightly fortitude. 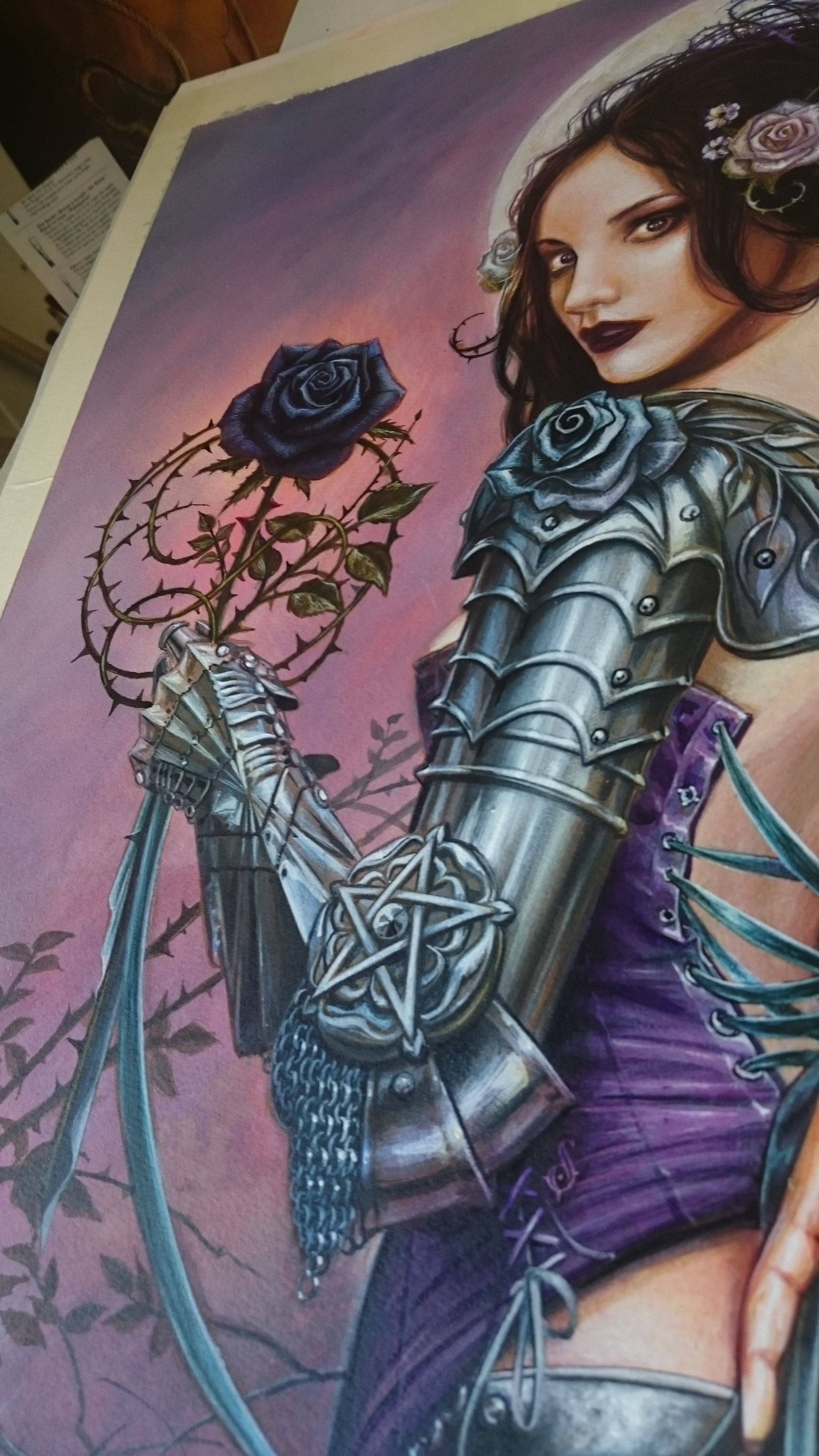