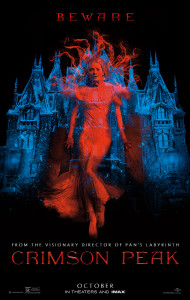 Fans of Gothic cinema have been left salivating at the prospect of a toothsome new horror film from Guillermo del Toro, scheduled to hit our screens in time for Halloween this year. Entitled Crimson Peak, it sees the acclaimed Mexican director return to the dark territory which first made his reputation, in a film that promises to just drip with macabrely romantic, period atmosphere.