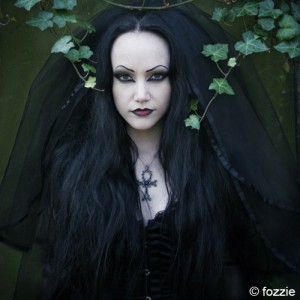 We have evidence of jewellery used as decorative adornment dating back as far as between 90,000 and 100,000 years ago. But as mankind progressed and our understanding grew, jewellery changed from merely decorations to representations and reflections; jewellery started to serve as a symbol of wealth and/or status, as well as to protect against harm, ward off evil, and heal ailments. And through the years and across continents from Egypt, Mesopotamia, Greece and Rome, Asia and India to the Georgian, Edwardian and Victorian eras an indeed to modern day, shining examples of such adornment have opened a window to the soul of humanity and shed light on our thoughts, dreams, beliefs and desires.

It is not difficult therefore, to understand why the alternative scene has embraced this means of decoration. Already very demonstrative in their means of attire, jewellery adds the embellishments and can act as icons of their philosophies for the more spiritual among us. Indeed many of the ancient symbols are often found in our ornamental adornment. However, how much meaning and power is put in these pieces vary from wearer to wearer. Sometimes it’s the simple aesthetic of the design that appeals and not its deeper meaning. But whether you wear to decorate or to invoke, it’s still good to have at least a rudimentary understanding of the myth behind the symbol that hangs glittering from your neck, ears and arms. And here I list a few of the most common:

Ankh: the ancient Egyptian hieroglyph meaning “key of life” and symbolises eternal life. For this reason the symbol has since been associated with many vampyric themes too.

The Gothic Ankh Pendant [P342]  is a vampiric combination of gothic style and the symbol of the Ankh which has long been an important symbol to both eternal life and gothic identity. The elegant leaf patterns are centred around a Swarovski crystal, giving the wearing an elegant look. For a more classic take on the Ankh, the Ankh Of Tau [P508] combines the serpent in gold place and the Ankh in pewter to create a powerful symbology of divine and eternal life. 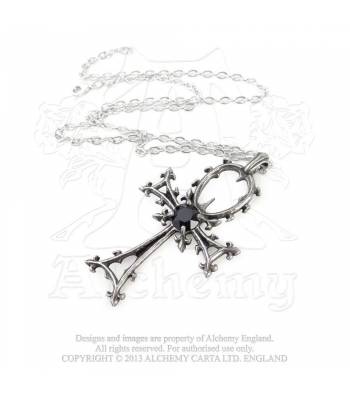 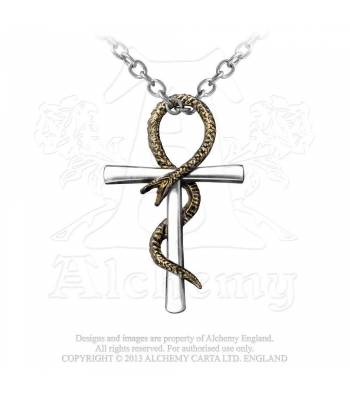 Latin Cross: this is the standard cross, with the base stem being longer than the other three arms. This is the principle symbol of the Christian religion recalling the Crucifixion of Jesus Christ and the redeeming benefits of his Passion and death. It therefore again has the ideas of death and rebirth and the promise of an eternal life after salvation.

The red enamelling featured in the Noctis Cross Pendant [P206] links the ideas of death and rebirth in one piece of jewellery. Its tudor style give the sense of history and importance centred around the latin cross. Another connotation of the Latin cross is mourning, the In Memoriam Ring [R145] in black enamel gives the wearer the sombre link to remembrance in death. 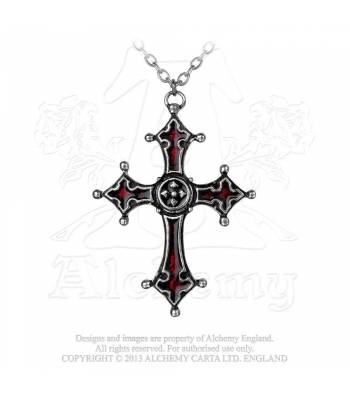 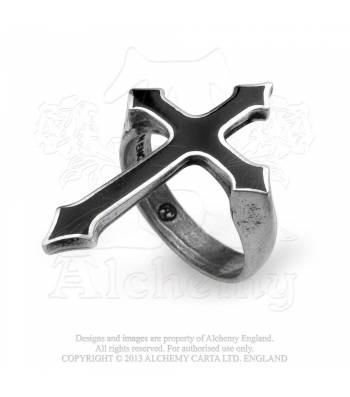 Pentagram: This symbol has gone through many incarnations and been adopted through the years by various faiths. Starting out as a Sumerian glyph it was later used in Christianity to symbolise the five sense and five wounds of Christ. By the mid 19th century it started being used as a magical symbol in the occult arts. Today it is most often associated with paganism and witchcraft with the two orientations (point at the top and point at the bottom) broadly representing the “good” and “evil” forces (a whole article can be written here on the interpretations and understandings of each…)

Alchemy has a range of various Pentagram products for both sexes. The Pentegration Wrist Strap [A85]  with the adjustable leather strap is a symbol of strength and power in the occult arts. For the fairer sex Alchemy has created the Rosues Pentagram Hair Pin [HS4] with rose detailing to link this small and perfectly formed pentagram to nature and magic alike. 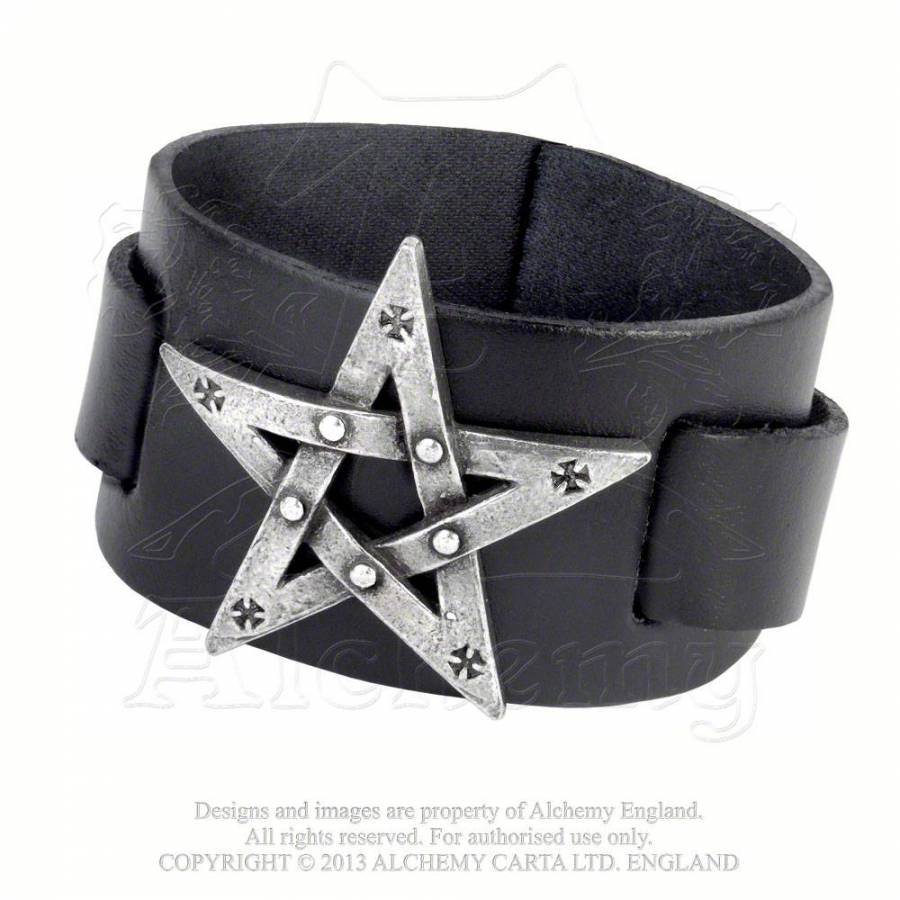 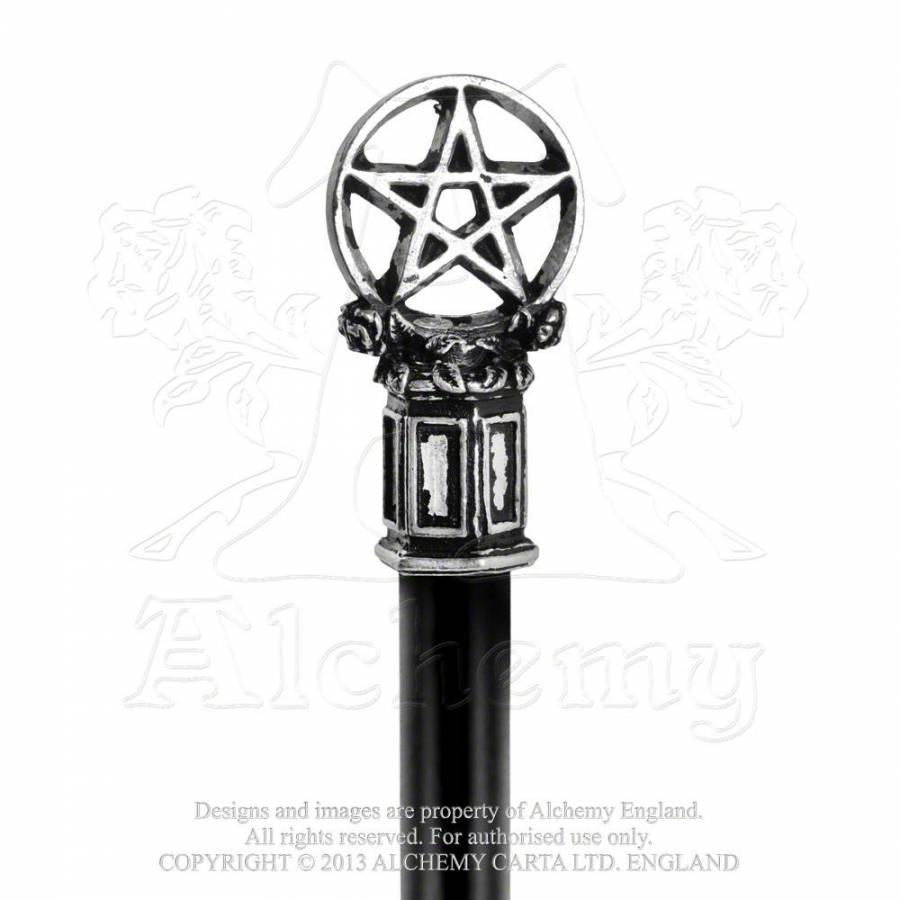 The Gothic Ankh was my very first Alchemy purchase and is still one of my most treasured pieces of jewellery. The ankh has always been one of my favourite symbols to wear because of its associations with the everlasting and interweaves nicely with the Amaranth mythology of “never fading”. These are my chosen storybook fairy tales that help mitigate the humdrum of reality, where one night on the dance floor will last forever and Monday will never come.