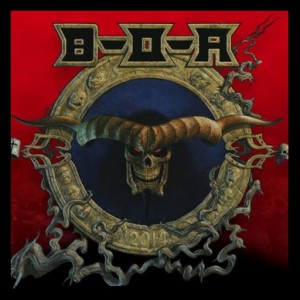 Alchemy have become regular visitors to Bloodstock Open Air festival. While we were hard at work on the stall, our resident metal fiend Gavin Baddeley was swanning around enjoying himself. Here he explains why he reckons Bloodstock’s become an essential date in the metal calendar…

Come early August it’s time for the UK’s metal faithful to make their annual pilgrimage to Catton Hall for the Bloodstock Festival. Now in its fourteenth year, Bloodstock has evolved from a modest indoor day event with an audience of some 700, to an open air weekend that welcomes around twenty times that number of eager fans to its extensive grounds. It may not be the biggest festival in the UK, or indeed the cultiest (or kvltiest?), but Bloodstock’s now in the proud position of being widely regarded as the connoisseur’s choice amongst Brit metal fests.

It got there in part from a succession of strong bills. While Bloodstock certainly pulls crowd-pleasing headliners out of the bag, the festival’s underlying philosophy focuses on the kind of acts beloved of the grassroots, but routinely overlooked by the British press and promoters. That same by-the-fans-for-the-fans ethos colours every aspect of the event to this day, with a sense of community and attention to detail conspicuous by its absence among many of Bloodstock’s more corporate competitors. 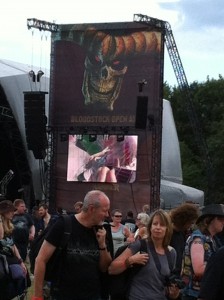 With over a hundred bands spread over four stages to choose from over the long weekend, it would be physically impossible to catch them all even if you could find the energy. Besides, there’s plenty to occupy you inbetween bands while your eardrums are recovering from one assault and preparing for another. Bloodstock’s always been prime people-watching territory, and this year was no exception – mingling among the assembled colourful metal tribes this year were Jesus (now something of a festival fixture) a squad of 2000AD-style Judges, an Alien, a Predator, Santa, and a brace of fire-breathing exotic dancers.

Those with a yen for more conventional culture could check out the RAM art gallery, set up for the first time this year to showcase the work of Bloodstock founder Paul Gregory. In addition to painting numerous impressive canvases inspired by the work of J.R.R. Tolkien, Paul’s also painted album art for bands such as Saxon, Dio and Motorhead. Also exhibiting in the gallery tent was Cynosure Guitars, a Miami-based studio that builds unique custom instruments designed to be functional works of art, such as the Infernus inverted crucifix guitar, built especially for Bloodstock.

Of course no festival experience would be complete without a few brews, and here too Bloodstock excels, with a beer tent offering over a hundred different real ales and ciders, many of them metal-themed such as Rainbow in the Dark, Black Sabbath and Stairway to Heaven. Lest anyone get the impression that I spent the entire weekend propping up the bar, here are a few of the more memorable performances I experienced over the weekend…

The first full set I caught came from Triptykon, issuing a punishingly heavy salvo of gloriously ponderous sounds. Singer Tom G. Warrior jokingly observed that he hoped it might rain to complete the gloomy atmosphere, a prediction that became less of a joke as weather reports started to come in predicting storms. Brit folk metal forefathers Skyclad delivered a solid set, that got some of the merrier punters jigging and reeling, but it was difficult not to still feel the absence of original vocalist Martin Walkyier. Down brought the Friday to a close with a dose of doom as dark and deep as Louisiana bayou mud. The music’s not to everyone’s taste, but Phil Anselmo remains one of metal’s most powerfully iconic frontmen, even when much of his banter consists of belching and jocular drunken profanity.

Old Corpse Road, the first band I caught on Saturday, play melodic British black metal inspired by ancient folklore. Dripping with eerie atmosphere and authentically original, they deserve to go far. Next up, Battleaxe offered an anthemic blast from the past, taking an enthusiastic crowd back to Brit metal’s 80s heyday. It was an unabashed nostalgic wallow, and vocalist Dave King danced like your dad, but there’s no denying that it was potently infectious, shameless old school fun.

Milan’s Lacuna Coil delivered a soaring, revitalizing display of Gothic metal, easily enough to captivate their many devotees, though not quite the band at the top of their game. Anticipation was palpably keen for Saturday’s headliners Emperor, who have reformed to play the entirety of their landmark black metal debut album In the Nightside Eclipse to mark the 20th anniversary of its release. Despite some pyros and icily atmospheric lighting, it’s a businesslike, stripped-down performance, a cold, razor-sharp reminder of why Emperor are still so revered among the corpse-paint contingent.

Intermittent downpours had thinned the crowds somewhat on Saturday, and the more alarming weather forecasts predicted the worst for Sunday. But diehards weren’t going to let a little rain stop play, and many braved the weather to sample Revamp, a Dutch symphonic metal sextet featuring the talents of soprano singer Floor Jansen. Jansen’s also taken over vocal duties for Nightwish, and fans of the immensely popular Finnish band were lapping up Revamp’s sultry set, despite the drizzle.

It was then, however, that I got a text from my cat-sitter to tell me that my kitchen was flooding. So, I reluctantly abandoned my Sunday in Bloodstock to deal with domestic disaster. As it turned out, the weather brightened up after I left, leaving the faithful to enjoy the likes of Saxon and Megadeth in comparative dryness, while I laboured in my kitchen with a mop and bucket. Ah well, there’s always next year. See you there…!