Lord Ruthven: Master of the night

Lord Ruthven, brought to life in the titular piece “The Vampyre” is the quintessential master of the night. Known for death and debauchery, this bat-like cross brings to mind how his evil overcame the virtue of those who laid down as his victims, surrendering their lives as he strode on into immortality.

Hailed as one of the first vampires in English literature, Lord Ruthven was truly a dark depiction of the beautiful, terrifying, seductive creatures of the night as we know them in the present. Through the good-hearted Aubrey, he carved a treacherous, debauched path through London society; seducing and killing women until his own death – swearing Aubrey not to speak of him for a year and a day thereafter.

But of course, the vampyre does not stay silent for long. Setting his amorous intentions on Aubrey’s sister, seeking only to corrupt the good and pure, Lord Ruthven sent the man into a crazed breakdown in which all of Ruthven’s secrets were spilled… and he died under mysterious circumstances not long after. 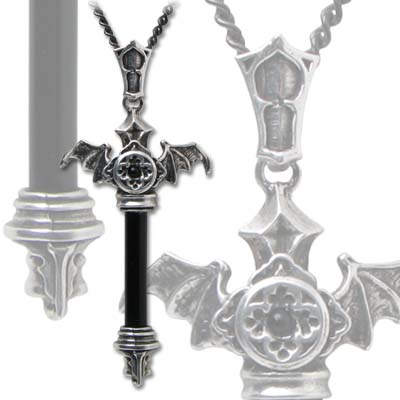 The Ruthven Cross (P595) is a memorial, then – to those who lost their lives to Lord Ruthven’s lust, but also a testament to immortality, and darkness conquering all. To order yours online, please visit www.alchemyengland.com/buy