Baphomet is a mystery. A contradictory and enticing symbol depicting a goat headed god with both male and female anatomy often surrounded by symbols and markings. And currently Baphomet is more popular than ever; influencing subculture scenes, fashion and much more! But it is so often misunderstood and is frequently tarnished with the same ideology of being a symbol of darkness and evil. In fact, Baphomet is not so simple as that. And to say that Baphomet is meant to represent all things in the universe is only the tip of the iceberg. 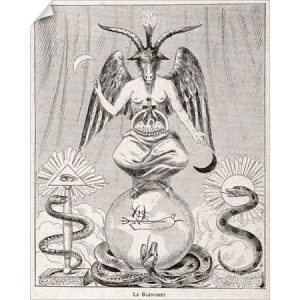 Since the first mention of the symbol in 1098, in a letter by Anselm of Ribemont, it has been seen as a sign of evil, and even adopted as a satanical insignia in the 1960s. It has been associated with all manner of heretical acts and a means to discredit other cultures and beliefs e.g. the Freemasons in the 19th century (falsely accused of worship). But why?! How could such an ancient and incredible figure be constantly black-listed?

It could be due to the fact that for a long time any horned figure was associated with the devil as Christian figure heads wanted to discredit other religions that they felt worshipped false idols. This was definitely true in Christianity’s prejudice to Pagan beliefs and Baphomet is assuredly a pagan God.

It could also be that similarly, people were afraid of change and coexistence – during the Crusades the members of the Knights Templar were charged with heresy for allegedly cohabiting with other religions.

Not to mention the extreme “satanic panic” in America in the 80s where there was societal fear of all things associated with the occult – this did nothing to help the reputation of Baphomet.

Or it could be simply because Baphomet does tend to look fearsome! 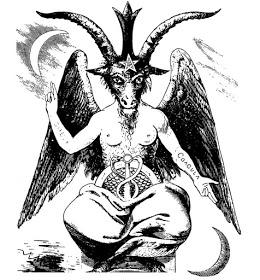 But Baphomet itself is a representation of duality, harmony even – showing the combination of sexes, gender nonconformity, and religious freedom. You can especially see this in the way the image is depicted, one of the many variations: showing both male and female body parts, shades of light and dark, part animal, part human, etc.

Now while you can see that Baphomet isn’t inherently a wicked symbol it isn’t all good either. Purely by representing all things, Baphomet can portray the darkness in all as well as the light. I feel the duality and non-conformist ideals of Baphomet make it a particularly important symbol for these current times – self-expression and a new understanding of identity can be shown by those who wear Baphomet
It is time for people to be educated on Baphomet and see it for what an amazing idol it is! The symbol is shown so beautifully in one of my favourite pieces by Alchemy – the goat’s head of Baphomet being the iconic identifier. 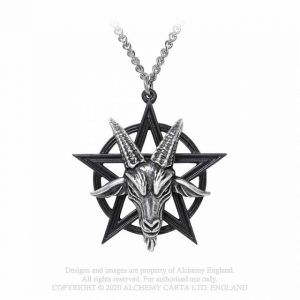 The beast is vicious and powerful-looking, the pure spirit of Baphomet represented in fierce eyes and a bold outline – reminding me of the creature “Black Philip” in the film ‘The Witch.’ One of my fave characters but of course portrayed as an evil familiar!
So those who think Baphomet is simply a talisman of the gothic occult – are wrong.

In truth, Baphomet is so much cooler!

The following article was originally posted at rosejekylle333.blogspot.com. It is republished here with permission from the original author.