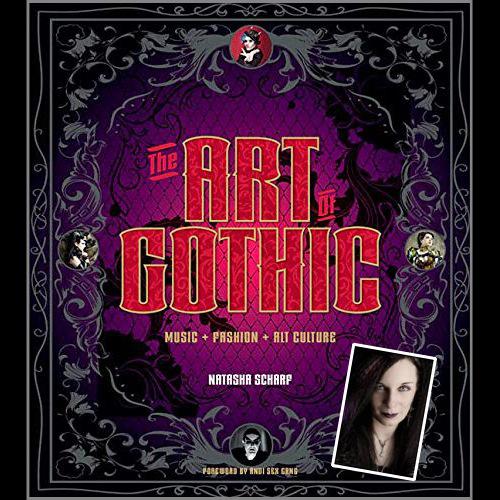 The Alchemist interviews Natasha Scharf, author of ‘The Art of Gothic’: Part 2.

In which Natasha, already relaxed and comfortable with her erudite responses to the stimulating, though more rudimentary questions asked of her so far, is taxed a little further for her opinions with some slightly more sensitive enquiries…

Q: Goth art, fashion and expression is copiously laden with dark, ironic and sardonic humour which, considering its subject, could almost be construed as ‘sick’. Are goth concepts innately tempered, symbiotically, with humour to render them more edifying?

That’s an interesting take. As a style, Gothic deals with things that are considered to be frightening or cause us unease and, as the similar name might imply, there’s certainly a fair deal of Gothic in goth. I think that historical definition of Gothic is why a lot of non-goths are surprised, and maybe even shocked by the dark humour that goth art, fashion and expression often exhibits. When goth came 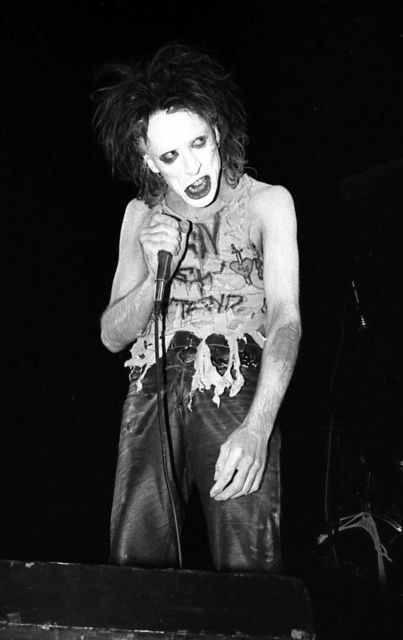 from punk in the late 70s/early 80s, it was less influenced by fantasy and more about creating a sinister atmosphere that would enhance the dirge-like music, poetic lyrics and dramatic imagery that bands were creating through light-shows and black, punk-influenced stagewear. It reflected a lot of the darker cultural cues of that era. But it wasn’t really until goth became called goth that followers and the media started to bring in those traditional Gothic tropes, or motifs.

Initially, goth remained serious and arty but then you had London’s Batcave club, which mixed up punk, glam and horror pastiche to create a more humorous spin in the early to mid 80s. That kind of humour really spread; it was synonymous with the mock-horror styles employed by horror punk and deathrock in North America and is still a key element of those contemporary movements, which have become more associated with goth over time. The very concept of horror ‘pastiche’ is intended to make fun of horrific themes so they become less frightening. In this instance, the humour is definitely innate and perhaps that makes it edifying by default but I’m not sure whether it was explicitly pre-meditated. As Nik Fiend from the post-punk/goth band Alien Sex Fiend explained when I interviewed him for The Art of Gothic: “We all have a skeleton under our skin…” Using skulls and skeletons in artwork isn’t exactly a new thing as a trip to somewhere like The National Gallery will reveal, but injecting them with humour is something that didn’t really start to emerge until the 20th century. It feels more like a self-depreciating nudge in the ribs or a shrug of acceptance.

Where, what we might term as, modern goth is concerned, I would suggest that one of the biggest key influences is Tim Burton. His 1988 movie ‘Beetlejuice’ was crammed with really dark humour but it wasn’t until 1993, when his story ‘The Nightmare Before Christmas’ was turned into a film, that he really became a big hit with a new generation of younger goths. He’s a master at creating things that are naturally gothic without forcing them to beso, or relying on clichés, and I think that’s why his work is so popular in the alternative community. I was watching ‘Nightmare…’ the other day and, when you think about it, it is quite a scary film but the subtext has more to do with being accepted as an outsider than it is about frightening people. That was a theme that really resonated with a lot of goths, both young and old, and all the cute merchandise that came off the back of it was symbolic of that. I guess non-goths might find it hard to accept that a skeletal doll might be cute or that a cuddly bat could be more pleasing to a goth than a plush dog, but I don’t think the creation of such apparent dichotomies is always a deliberate attempt to make the subject more edifying.

Q: The creativity within much expressionist, pop and modern art, as well as in rock music in general is well know to be largely inspired and fuelled by intoxicants;, i.e. alcohol and narcotics. Does this generalisation embrace gothic art and music, etc, or is there a case for ‘goth’ creativity being born out of a naturally more intense consciousness? 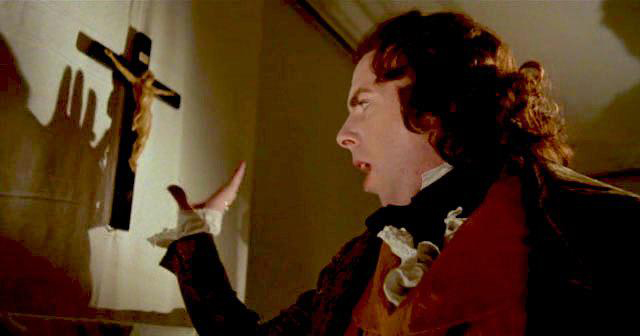 I think it’s a combination of both. Historically, the 19th century’s Gothic literary movement was associated with excess – you can see an artistic depiction of this in Ken Russell’s ‘Gothic’, a film about the legendary incidents in Lake Geneva that gave birth to Gothic classics Mary Shelley’s ‘Frankenstein’ and John Polidori’s ‘The Vampyre’. Many scholars believe that Lord Byron was one of the original goths and Polidori certainly based the appearance of the eponymous vampyre on him!

Taking things into this century, there are a lot of gothic artists and musicians who do use alcohol and recreational drugs to enhance their creativity yet here are also a number who don’t use any intoxicants at all – it’s well known that fine artist Anne Sudworth’s “intoxicant” of choice is chocolate! But there is a bond that connects both types of creative and that’s what you refer to as a “naturally more intense consciousness”. In other words, there’s something innate about the sort of darkness that oozes from a goth’s creativity, regardless of whether intoxicants have been used or not!

Q: Does the overt ‘goth’ iconography of death, darkness and horror demonstrate a healthy acknowledgement and purging of the darker side of our human nature, or might it instead, as many of our vanilla-minded society believe, reveal a perverse disturbance of the mind?

Death, darkness and horror are all a natural part of humanity; the ability to address them is arguably more a sign of a healthy mind rather than an unhealthy one because you’re not repressing your fears. Instead, you can expressing them through an artistic metaphor in order to confront them and help others in a similar situation.

Of course, as with everything, there will always be exceptions and there have been Gothic artists whose horrific visions have provided a mirror to their psyche. Victorian painter Richard Dadd is one that immediately springs to mind although he wasn’t a goth. His art had always erred towards the supernatural but it became far more hellish – art critics have applied the word ‘Gothic’ – after he was committed to a psychiatric hospital for murdering his father. His famous ‘The Fairy Feller’s Master-Stroke’ is a prime example of his inner turmoil, which some academics have suggested was undiagnosed paranoid schizophrenia. But art can also be considered therapeutic so perhaps another way of looking at it is this horrific art was part of a personal therapy that helped his mind to heal.

Q: Is there, perhaps, a covert, abstruse and uniquely implicit relationship between the darkly ‘goth’ ethos, and an inherently deviant sensual and/or fetish tendency? 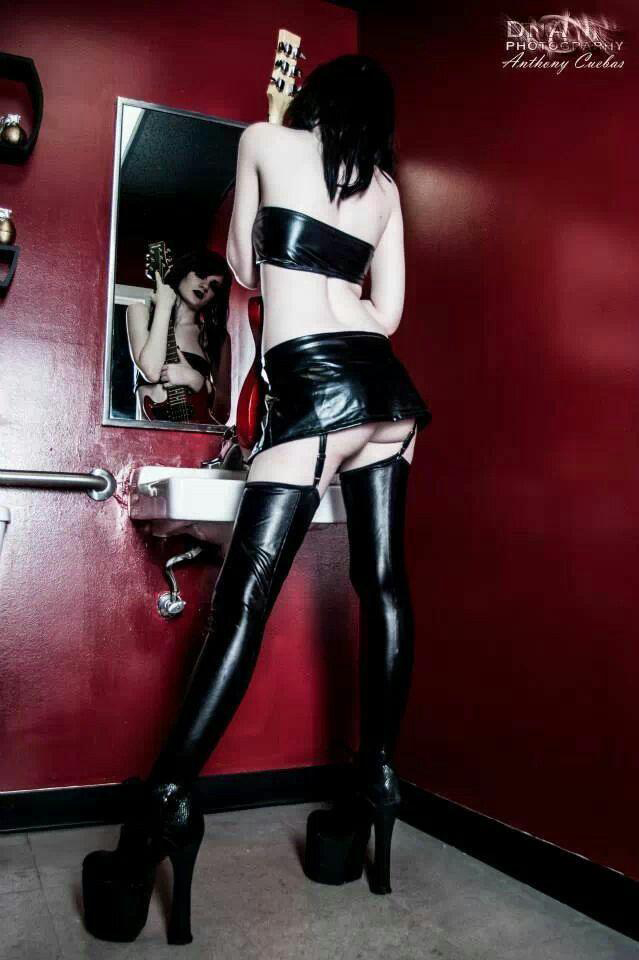 The relationship between goth and fetish is a bit of a moot topic. Looking at goth in terms of a musical movement, there’s no connection at all, but looking at goth as an alternative subculture and style, there are certainly some crossover elements.

I think one of the best ways of exploring the perceived connection is with the Venn Diagram. Imagine goth in one circle and fetish in the other; they’re two distinct movements but there’s some common ground in the middle, either through shared wardrobe choices or alternative sexual preferences. No matter how many times the mainstream dips into goth and tries to water it down, the underground movement still remains alternative, as does the fetish scene, and I think that’s where the connectionlies. Many goths are attracted towards alternative lifestyles in the same way that they’re attractive towards alternative music and style.

Q: Are you planning any other books in the near future that might appeal to a similar audience?

Yes, I am but I’m sworn to secrecy about them at the moment – sorry! Needless to say, I will be writing more goth-friendly books in the near future because there are still so many untold stories that I’m just itching to share with my fellow goths.

Natasha Scharf. The author of the books ‘The Art of Gothic’ (Omnibus Press/Backbeat Books) and ‘Worldwide Gothic’ (Independent Music Press).