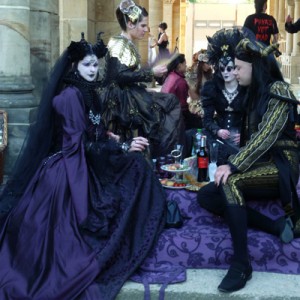 Wave-Gotik-Treffen is the world’s largest meeting (or “treffen”) of darkly inclined souls. The largest recorded attendance was in 2000 with over 25,000 people and this never drops down below 15,000. I recall my first WGT (not to be confused with the World Golf Tour ;), walking through the gates of the Agra grounds and seeing more goths in one place than I had ever seen before. But not just any goths – these were some of the most beautiful and creatively attired than I had ever seen! Add to this hundreds of bands in over 40 venues spread out across the city, as well as a huge market hall, pagan village, Viking village, club nights, fetish events, picnics, theatre and classic musical shows there really isn’t much time to be bored! In fact finding time to sleep when the club nights close at 5am in the morning and the bands start again at 11am, there’s just enough time to change outfits! 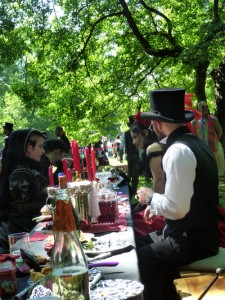 My first WGT was in 2005 and this, the 23rd, was my eighth. Unfortunately though, I must say this one has been my least favourite – mostly because of the freak heatwave that saw temperatures rising up to 35 degrees Celsius – and I have no need to tell you that this is not the ideal weather to bring out your goth finery. Especially as, in my infinite wisdom, I decided a pvc and feathered Victorian bustle outfit was a great choice! But it worked so well with my Murder of Crows necklace that it had to be done. And indeed there were many beautiful goths I saw that weekend who were similarly suffering for their art!

Even with over 150 bands I somehow managed to catch none. The thought of the Agra Halle crammed with 10,000 sweaty people or the sun trap that is Parkbune, drove me to choose picnics under trees and air-conditioned bars with frozen daiquiris instead. This is a shame really, as WGT is a great place to discover new music and a number of my favourite bands are ones I first heard there. The cavernous underground Moritzbastei also proved a respite with the dancefloor denizens – UK DJs Dave Exile, Vellouria and Martin Oldgoth – undid any semblance of cool I managed to harvest by giving me no other option to dance to the great tunes they spun.

While this festival didn’t touch the core of my love for the scene, it did remind me the fantastically creative and amazingly unique individuals that it fosters. I cannot imagine anyone saying goth isn’t the greatest eye-candy after attending Leipzig. Book now if you plan on going next year, flights and hotel rates are already on the rise! 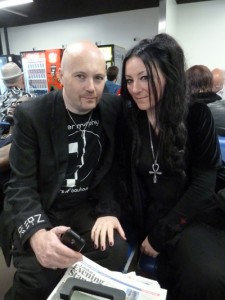 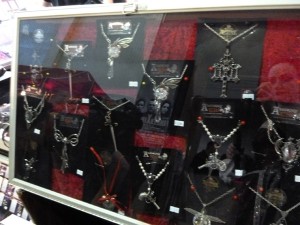 Found among the treasures in the Agra hall – an Alchemy stash! 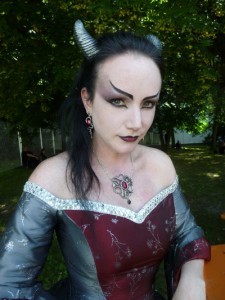