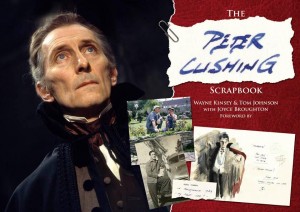 Last Sunday, May 26th, was the centenary of the birth of one of Britain’s best-loved character actors. Some know Peter Cushing as the villainous Grand Moff Tarkin from the original Star Wars film, and others remember him as the only performer to play Dr Who on the big screen. But the prolific actor was best known to millions for his horror films, giving definitive performances as the obsessive Baron Frankenstein, and the intrepid vampire-hunter Professor Van Helsing, for Britain’s legendary Hammer studios. All of Cushing’s work was distinguished by his steely, sinewy presence, and crisp, authoritative delivery, lending plausibility and gravitas to even the most ludicrous scripts. 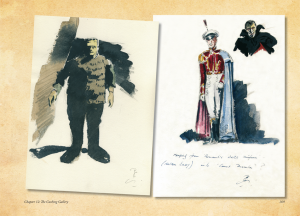 The Peter Cushing Scrapbook, published to commemorate the actor’s centenary, is a beautifully presented, fascinating book. Using a rich array of visuals, it reveals the man behind the actor, as – ironically perhaps – while he was famous for frequently playing bloodthirsty fiends, behind the scenes, Cushing was known as the nicest man in show business. Even Hammer experts will find much to discover in this handsome volume, not least numerous charming watercolours and sketches made by the actor, including suggested costume designs for films. The Peter Cushing Scrapbook is a fitting tribute to an inspirational performer and consummate English gentleman. It is available exclusively from Peveril Publishing: for further details visit http://peverilpublishing.co.uk/the-peter-cushing-scrapbook/