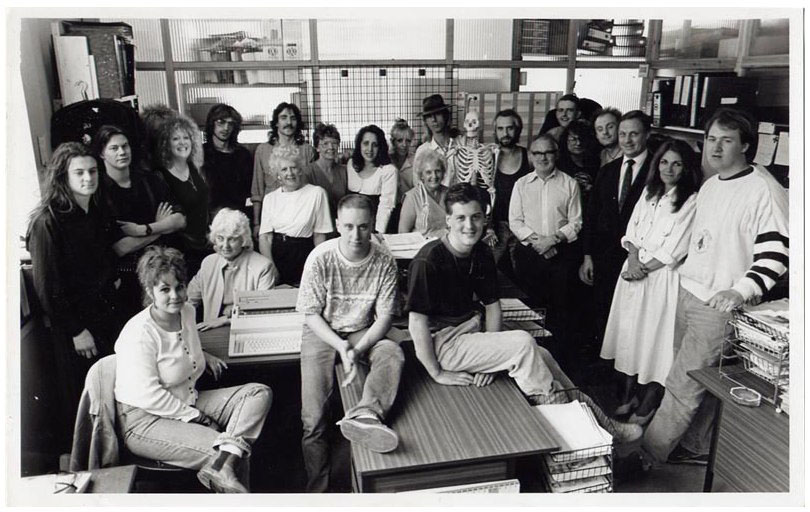 Alchemy have been established for 35 years. Having began in 1977 in a one-roomed flat in England, as two young, alternative culture model-makers and artists, hand-making generic rock music badges from scrap metal and selling them to fans by mail. In less than a year We had taken a nearby small shop with a workshop above, and were supplying shops and distributors with quantities of the merchandise. Production techniques became more sophisticated and staff were needed to expand production, and by around 1980 We began making exclusive badges and necklaces for headline rock bands on tour.

In 1984, the biggest breakthrough came with a new, small collection of simple, gothic & heavy-metal style pewter jewellery called Alchemy Metal-Wear. Nothing like this had ever been seen before except for a few silver skull rings, and so Alchemy set the new trend and standards for alternative jewellery. Alchemy became so popular, so rapidly, that more staff were recruited and exports to Europe began.

After 35 years, We have expanded our collections to suit all ‘alternative’ tastes and have over 600 items in the Alchemy1977 catalogue. W are still designing and making our extraordinary pieces by hand in our workshops in England, and now sell to over 50 countries. 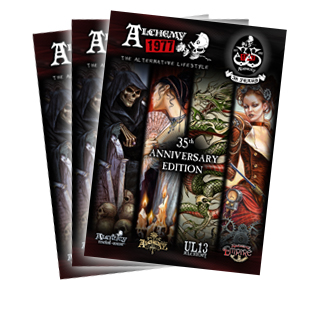 Alchemy1977 is now recognised across the world as the style-innovator of the alternative cultures, the high-end designer brand; the ‘Gucci of gothic’ and the ‘Cartier of rock’. Music gods such as Ozzy Ozbourne and Alice Cooper have been patrons of Alchemy1977 over time, as well as many upcoming bands of today like Five Finger Death Punch and Lacuna Coil, etc.

Alchemy’s British team of specialist designers, artists and model makers is second to none, and every jewellery design is developed around a thoroughly conceived and/or researched theme, often historical, mythological, legendary or metaphysical.

Alchemy Studios, the creative arm of the production company, is prolific and diverse in its extraordinary output. Every year the team produce at least 150 new jewellery/accessory items for its alternative collections, 80 pieces of artwork and design and produce around 100 custom made products for many prestigious clients.

The Alchemy brand has grown to be highly respected amongst aficionados everywhere, from Los Angeles and Paris to Dubai and Hong Kong, and typically, owners of Alchemy pieces treasure them for eternity.