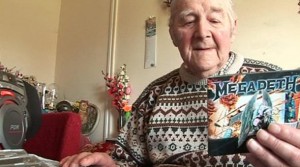 Anyone who’s really into heavy metal can tell you that the clichés about the music’s fans all being loudmouthed, leather-clad adolescents isn’t true now, if it ever was. Few illustrated that better than Owen Brown, an octogenarian flat-cap wearing, soft-spoken farm labourer from the quaint English village of Weobley, who became internationally known as ‘the world’s oldest heavy metal fan’. He started on Elvis, but quickly graduated to harder stuff, like Cream, then metal legends such as Judas Priest and Iron Maiden. When Owen was buried last week, it was to the frenzied strains of ‘Skin o’ My Teeth’ by US thrashers Megadeth. Megadeth responded to the sad news of Owen’s death with a tribute that described the Herefordshire granddad as their “oldest and most cherished fan”.

Not everybody appreciated Owen’s taste in music, and he was often exiled to the shed at the bottom of the garden, where, in a pair of slippers and nursing a cup of tea, he could enjoy the kind of hard, fast, thunderous sounds he enjoyed. “It’s great because I can play it as loud as I want in there,” the hard rocking OAP once observed philosophically. “I can sit back with a drink and listen to Megadeth with no worries in the world. When all the kids were at home they would often ask me to stop playing it or turn it down but it’s only worth listening to at full blast.” We’re great believers in growing old disgracefully here at Alchemy, and we’d like to join the rock hordes in throwing the horns in salute to Owen Brown, a true metal veteran!