Come Into My Parlour….

In this dramatic, chilling fossil, an arachnid was trapped in amber, just as it was about to devour a wasp, some hundred million years ago. Amber has been employed to make jewellery and other items of beauty since Neolithic times. But it also has great scientific interest that stretches even further back into pre-history. For amber – formed from fossilised tree resin – can preserve examples of ancient animal and plant forms from long before man walked the earth. There can be few more striking – and simultaneously sinister and fascinating – examples than this ancient struggle, frozen forever from when dinosaurs ruled the earth, and recently discovered in the South-East Asian nation of Myanmar:

‘This juvenile spider was going to make a meal out of a tiny parasitic wasp, 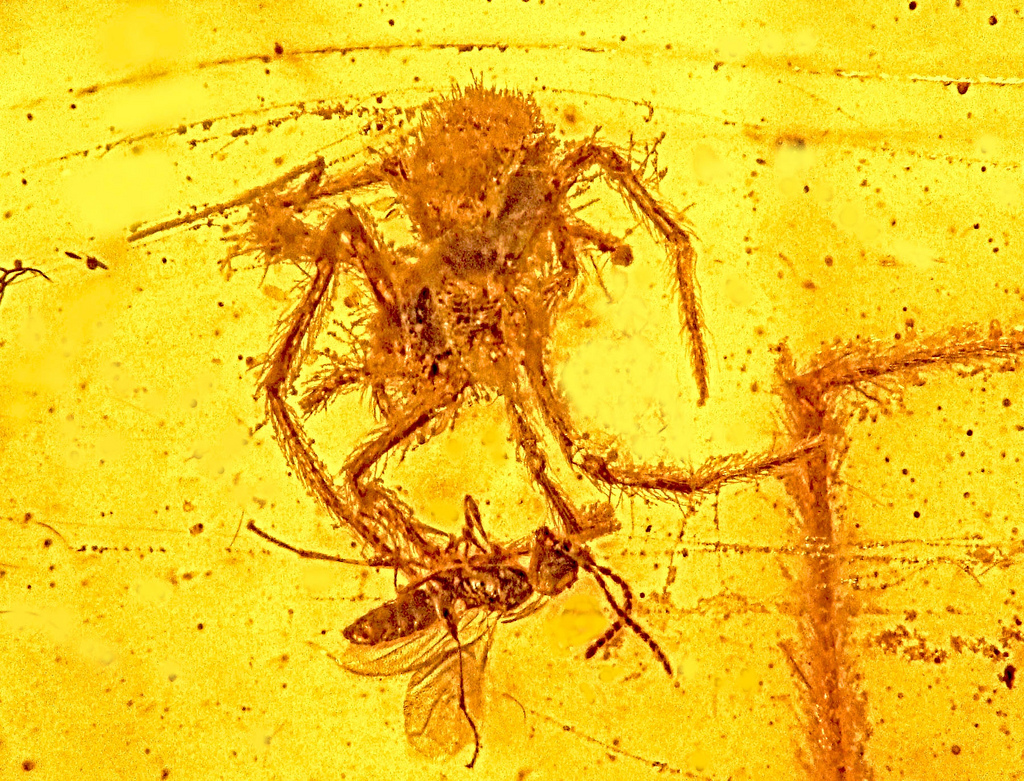 but never quite got to it,’ explains Professor George Poinar Jnr. in the journal Historical Biology. ‘This was a male wasp that suddenly found itself trapped in a spider web. This was the wasp’s worst nightmare, and it never ended. The wasp was watching the spider just as it was about to be attacked, when tree resin flowed over and captured both of them.’ The Professor, an expert in such finds from Oregon State University, is excited by the dramatic discovery as it is the earliest example of a spider capturing its prey thus far uncovered. There’s also a little poetic justice there, as the ancestors of the wasp frozen here in amber now prey on spiders…

While we can’t deny that the fossil’s a little creepy, even icky, there also something profoundly beautiful about the colours of the amber, and captivating about the fatal moment suspended for such unimaginable lengths of time. There is something simultaneously terrifying and enchanting about arachnids that transcends time, and that our designers at Alchemy keep being drawn to. Just like our poor unsuspecting wasp… Take, for example, the Incy Wincy Forme Hand-Ring(R177), which uses its uncanny eight-legged elegance as the basis for an Art-Deco accessory. Or why not go for the Nidus cuff stud earring (E193), a ‘grotesque spider, chained to its fine lined web’.. 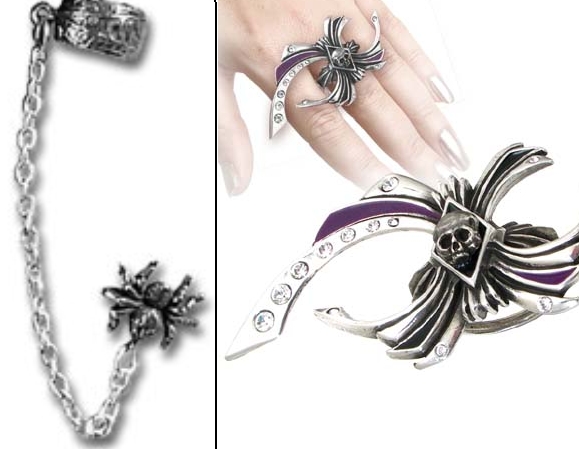 Order yours online and many other Alchemy products here:www.alchemyengland.com/buy